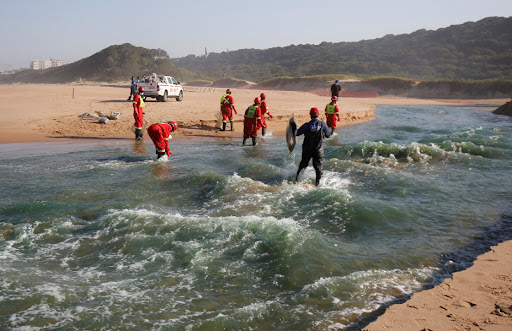 An entire ecosystem, which includes the oHlanga tributary, the uMhlanga estuary, the beaches and the coastal environment, has been seriously affected and may take several years to recover from the fallout from a fire at the UPL chemical warehouse in July.

This was announced by minister of forestry and fisheries and environmental affairs, Barbara Creecy, on Sunday when she released her department’s preliminary findings of an investigation into the warehouse fire at Cornubia in KwaZulu-Natal.

The incident, which took place in July, saw thousands of Durban residents waking up to the overpowering stench of burning chemicals after arsonists and looters set fire to a huge warehouse containing toxic pesticides and chemical products owned by the Mumbai-based chemicals giant UPL.

“Empirical evidence shows that an entire ecosystem, which includes the oHlanga tributary, the uMhlanga estuary, the beaches and the coastal environment, not only in the vicinity of the UPL, but for several kilometres to the north of the uMhlanga estuary mouth, has been seriously affected and may take several years to recover from this incident. In the days after the fire, the air quality in the immediate facility was also affected,” the report found.

Creecy said an independent team of investigators comprising environmental management Inspectors from both the national and provincial departments have initiated a criminal investigation in terms of the Criminal Procedure Act.

This involves the collection of evidence, including sampling of, among other things, sand, water, fish and plants, to determine criminal liability in relation to the harm caused to the environment.

“The probe will also take into account the liability of other role players that may have been involved in this matter.”

The findings indicate that UPL was not in possession of the requisite environmental authorisation before establishing its operations in Cornubia three months before the incident. The authorisation should have been obtained from the KwaZulu-Natal department of economic development, tourism and environmental affairs.

In addition, UPL failed to obtain a critical risk assessment or planning permissions from the eThekwini metro, in terms of the Occupational Health and Safety Act and relevant municipal bylaws.

Durban chemical facility United Phosphorous Ltd (UPL), where a massive fire broke out during the unrest in July, says it is unaware of any criminal ...
News
4 months ago

UPL said in a statement in response, it was “deeply disappointed” that Creecy “has decided to release her department’s preliminary findings of an investigation into a fire incident ...  without any prior discussion with the company”.

UPL said they were sent the preliminary report late on Saturday night, “a matter of mere hours before its release”.

The company said they were still busy with the preliminary report — but felt it did not adequately address the fact that the fires were set by rioters, that emergency services had been unable to contain them and that UPL, along with many other businesses, had been “left to fend for themselves in the face of unprecedented and unforeseeable levels of violence and criminality”.

KwaZulu-Natal MEC for economic development, tourism and environmental affairs Ravi Pillay said findings would ultimately be made by a court of law once the NDPP makes a decision on whether or not to prosecute this matter.

* This is a developing story