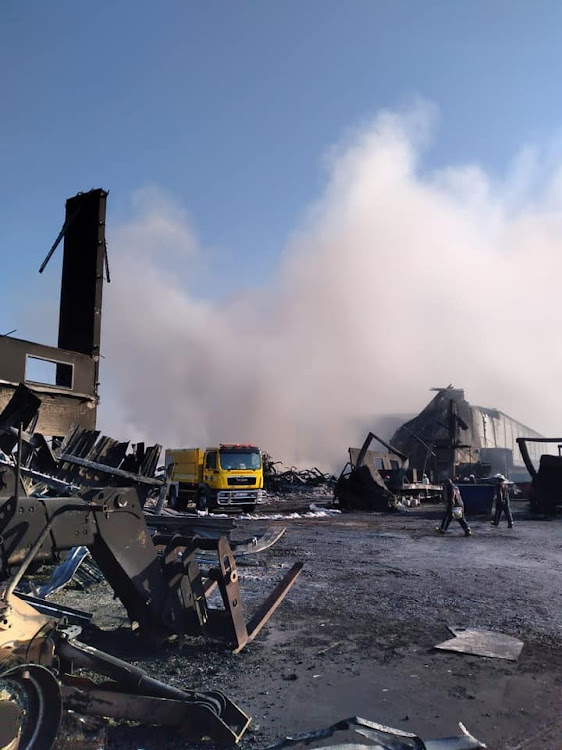 Repeated attacks and the torching of a new warehouse in KwaZulu-Natal's Umhlanga area have sparked concerns of air pollution and toxic spills in the area.

People caught up in the smoke are advised to protect themselves by breathing through ordinary masks and wearing glasses to protect their eyes.

Residents in areas north of Durban are also reporting smoke residue from burnt chemical products, with the smell being experienced from time to time depending on the wind direction as it dissipates. Residents are advised to close windows and doors and put wet cloths over vents until smoke clears as a precautionary measure

The eThekwini municipality, on the advice of the KwaZulu department of economic development, tourism and environmental affairs (EDTEA) and Ezemvelo KZN Wildlife, has closed all beaches north of Umgeni estuary due to chemical spillage into the Umhlanga lagoon.

The closure will affect Beachwood, Virginia, Glenashley, La Lucia, Umhlanga main and Bronze, Umdloti, La Mercy and Tongaat beaches and all tidal pools. Local municipalities further north have also been notified and people are advised to avoid the beach areas until everything has been cleared and deemed safe.

Dead fish and crayfish washed up on the beaches of Umhlanga and Umdloti, north of Durban, have prompted a warning by the eThekwini municipality for ...
News
1 year ago

Authorities are also warning people not to pick up or collect dead marine life lying along the Umdloti and Umhlanga coastline as they have been contaminated with toxic chemicals and could be harmful.

All recreational activities, including fishing or surfing, bait collection and picking up of dead species, are prohibited. And a temporary ban has been placed on collecting or harvesting of any marine living resource in the area until the cause is determined and there is no longer a threat of harm.

According to information released by warehouse owner UPL, the facility was used to store plant protection products and was well secured before multiple fires in the area and ongoing looting led to the warehouse being overwhelmed and burnt down on Monday.

A lot of smoke was released into the atmosphere, and water used to fight the fire overran the catchment devices.

Access to the site was only possible from Tuesday, and a specialised chemical cleanup company was appointed to clean up the spill and remove suspected contaminated items. Special cleanup crews are on site to deal with the collection and disposal of dead marine and bird life in a responsible manner.

Authorities are continuously monitoring the area to determine the extent of the impact of the spill. So far only marine and bird life in the Umhlanga estuary and beach area and at the Umdloti beach have been affected.

The fish kill follows the toxic chemical spill into the Umhlanga estuary after a chemical warehouse was burnt down during this week’s unrest. The river mouth has been left open on specialist advice which suggested this would help to dilute the contamination in the lagoon.

Environmental specialists are taking samples from the Ohlanga river and Umhlanga lagoon to determine if there has been any contamination. These will be processed as soon as possible.

Authorities have been notified and anyone worried about contamination can contact the eThekwini Disaster Management Team on 031 361 0000 or seek medical attention if they have concerns. Contamination or fish kill in any other areas can be reported to Spilltech on 083 253 6618.