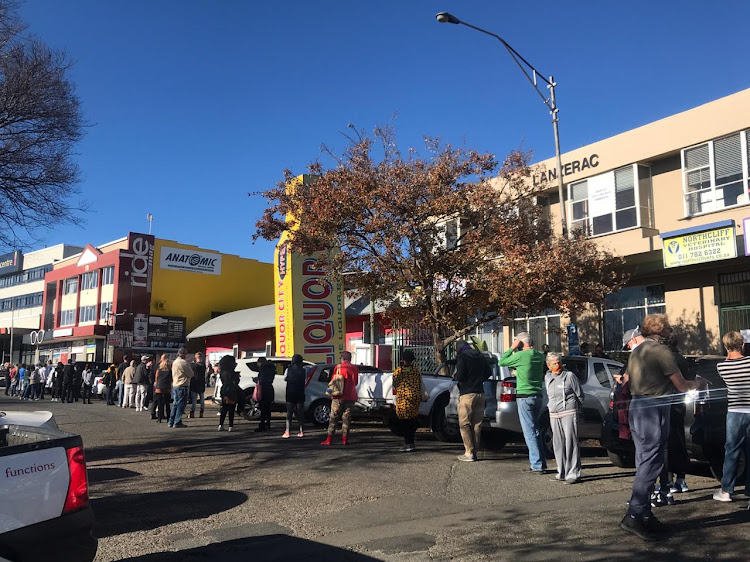 People queue outside the Beyers Naude Liquor City before its 9am opening on Monday, June 1.
Image: Kgaugelo Masweneng

There have not been any calls to reinstate the ban on alcohol sales, the presidency said on Monday afternoon.

This comes as a number of voicenotes were circulating on Monday claiming that the government was going to reinstate the ban on alcohol sales this week.

The ban on sales was lifted under level 3 of the lockdown, but sales are only allowed from Monday to Thursday.

“No such calls have been tabled before the national coronavirus command council at this point,” said presidency spokesperson Khusela Diko in response to questions on Monday.

Co-operative governance & traditional affairs spokesperson Mlungisi Mtshali was quoted by Caxton as saying that government had not taken a decision to reverse the ban. Cogta, through minister Nkosazana Dlamini-Zuma, is responsible for gazetting the Disaster Management Act regulations.

In one of the circulating voicenotes, an unidentified man claimed his “captain” - an apparent reference to a police officer, but even this was not detailed - was a member of the national command council and confirmed that the ban would be put back in place.

Another voicenote was from a woman - again unidentified - saying that “a friend of a friend who is a manager at a Spar liquors” received an e-mail stating that the ban would be put in place again this week.

On Monday, Eastern Cape premier Oscar Mabuyane told eNCA that the government was considering lobbying for a ban on the sale of alcohol in the province.

“Alcohol is a problem generally. In our command council as a province, we said we must lobby to close down this problem,” he said, adding that they were concerned about the way in which some people had celebrated last week's lifting of the ban on the sale of alcohol.

Also on Monday, Gauteng health MEC Bandile Masuku said the return of the sale and consumption of alcohol had put a “massive strain” on emergency departments at hospitals in the province.

“It is something of great concern because now we have to navigate in terms of the competing needs of the resources that we have,” he said while visiting schools that reopened on Monday.

Masuku said these concerns would be raised with the national and provincial command councils on the coronavirus to ensure the strict regulation of alcohol.

A senior ranking Cogta official in KZN said there had been discussions regarding stopping alcohol sales again, with the driving factor being the number of fatal accidents since the ban was lifted. However, he stressed no action had been taken at this point.

EFF leader Julius Malema also strongly opposed the lifting of the ban on alcohol sales, and Gauteng education MEC Panyaza Lesufi has been on a campaign for an alcohol-free SA.

But it seems that many people are reacting to the rumours and stocking up.

An employee at a Durban bottle store said they had been busy on Monday and had heard the speculation, but nothing official had come through to staff.

The Eastern Cape government wants the national command council to consider banning the sale of alcohol in the province.
News
2 years ago

A woman has appeared in court for allegedly stabbing her lover to death following an argument while they were both reportedly drunk.
News
2 years ago
Next Article