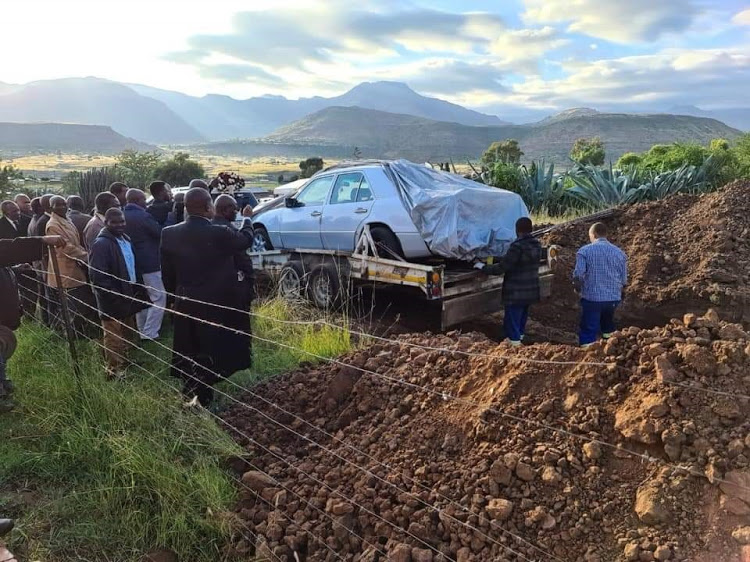 Jozana village in Stekrspruit came to a standstill on Saturday as the funeral of Tshekedi Pitso became the centre of attention.
Image: Mfundo Nqata Bongela/Facebook

Two years ago Tshekedi Pitso shocked his family when he told them he wanted to be buried inside his favourite car.

Pitso, who was 72 years old at the time, had bought himself a 1980s E500 Mercedes Benz adding to a fleet of Mercedes Benz that he owed.

Pitso’s niece Sefora (Pitso), 49, said at first the family was shocked at the news, but he always spoke about how he would love his funeral to be.

The village of Jozanashoek in Sterkspruit, Eastern Cape, where Pitso was a chief and also a member of United Democratic Movement (UDM),  came to a standstill on Saturday as their chief was buried in Mercedes Benz.

“My uncle made it clear that he wanted to be buried inside his car. He was a lover of Mercedes Benz and as a family we had to grant him his wish,” she said.

UDM leader Bantu Holomisa said he was not surprised that Pitso wanted to be buried in his car.

“This is so like Pitso, he was an old stock, however, he was also very streetwise,” Holomisa said.

Holomisa could not attend Pitso’s funeral as he had to test for Coved-19 as he was one of the people who were in contact with ACDP leader Kenneth Meshoe.