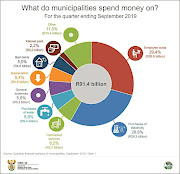 SA municipalities spent a combined R91bn between June and September, with almost a third of the expenditure covering salaries and other employee-related costs.

This is according to the latest quarterly financial statistics on municipalities released by Statistics SA this week.

The report showed the bulk of expenditure was on "employee-related costs" which includes salaries, allowances, contributions to pensions, medical aid, uniforms and housing subsidies which accounted for almost 30% of the total spent as well as purchases of electricity of just below 29%.

Stats SA director of local government institutions Malibongwe Mhemhe said wage and overtime payments for employees were the contributing factors for the increase. "[The] Reason for salary increase is mainly due to a wage increase implemented with effect from 1 July 2019 by most municipalities as well as overtime worked by some municipal employees," Mhemhe said.

Delivery of water services to people cost municipalities over R5bn, while R26bn was spent on the bulk purchases of electricity. The municipalities managed to make R4.6bn profit on sales of power, and raked in R10bn in water sales.

According to Stats SA, R10.4bn was spent on "interest paid, grants and subsidies paid, remuneration of councillors, departmental charges and fees and trade licences".

Thirty-nine of the total 257 municipalities could not provide Stats SA with figures for the quarterly report or what they provided was not usable.

The statisticians had to use previous information to "arrive at current figures after being appraised for its suitability".

Stats SA said the municipalities blamed this on a new system they had developed, the Municipal Standard Chart of Accounts (MSCOA).

"The systems of some of the municipalities were generating reports with erroneous figures that could not be used.

The report also stated that R347m was spent on consultants in the municipalities, a big drop from R862m spent in the quarter ending in June, while R226m was spent on accommodation and travelling for officials, saving a total of R59m compared to the previous quarter.