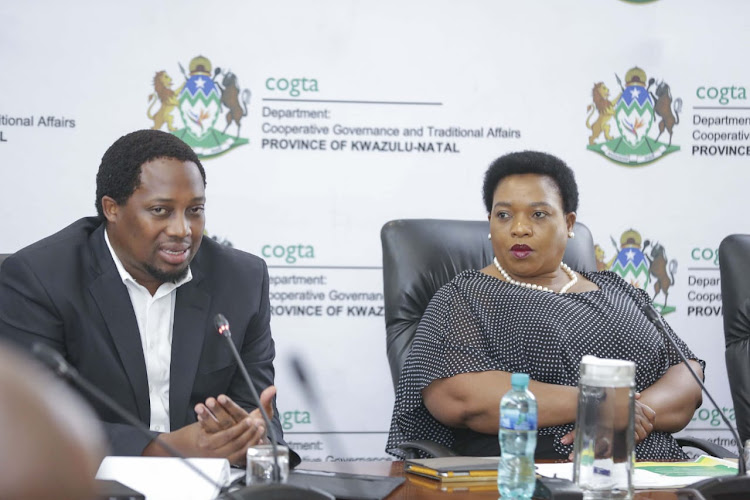 Cooperative Governance and Traditional Affairs MEC Nomusa Dube-Ncube during a meeting with officials from the Richmond and Mtubatuba municipalities on March 19
Image: Supplied

The KwaZulu-Natal department of cooperative governance and traditional affairs (Cogta) has for the first time taken over the reins of two of its municipalities in one day.

The department said in a statement issued on Thursday they had directly intervened in the embattled and cash-strapped Mtubatuba and Richmond municipalities as a final attempt at saving the municipalities.

Cogta officials informed municipal executives of their decision on March 19. This means that KZN Cogta will be appointing ministerial representatives to prepare and implement recovery plans.

"These interventions mean that the provincial government will take over the executive functions of these two municipalities temporarily to restore them to full functionality. This is a measure of last resort and we have decided to intervene at Mtubatuba and Richmond after all other attempts at support had failed," said KZN MEC for Cogta Nomusa Dube-Ncube.

In a statement, Cogta said that despite continued support from the department, the Mtubatuba council and administration had found themselves once again in financial trouble and unable to deal with waste management issues in two of its towns.

"This time, our intervention is in response to Mtubatuba Council’s inability to meet repeatedly due to a lack of quorum and the municipality’s failure to adopt the annual report, including the annual financial statements, audit report and audit response plan. Mtubatuba’s reckless spending now also indicates that the municipality will soon not have sufficient money to fund its operations," said Dube-Ncube.

"There have been allegations of maladministration, fraud, and corruption against senior managers at Richmond. Similarly, labour protests, work stoppages and general safety concerns have prevented the auditor-general from completing the audit for the 2017/2018 financial year at Richmond. Political tensions are evident here and impacting negatively on service delivery,"  she said.

Cogta said that both municipalities welcomed the decision and saw it as a burden relief.