Police rely on candles to do work 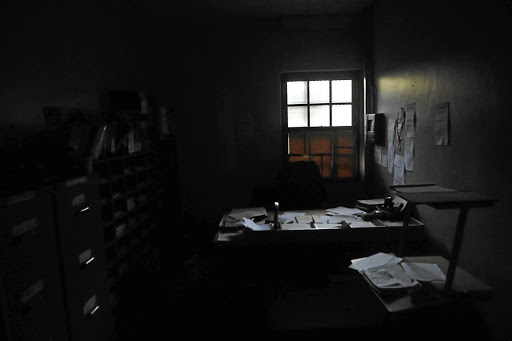 Police officers at the Germiston railway police station work in a building that has no electricity as a result of faulty cables.
Image: Veli Nhlapo

Dozens of police officers stationed at the Germiston railway police station are fearing for their lives as they have been working in a building that has no electricity since January.

Now officers have threatened to down tools if management does not intervene and provide a safe working environment on the premises of Ekurhuleni's train station.

The officers have to use candles at night.

A female officer who asked not to be named said they were scared criminals would take advantage of the situation. "We have been complaining about this problem since January. It was reported to our superiors, who in turn said they reported the matter to the Prasa [Passenger Rail Agency of SA], which owns the building but nothing has been done," she said.

Prasa spokesperson Nana Zenani said the offices were affected by a power outage due to a cable fault. "To date, we are sitting without power at the station," Zenani said.

She said Prasa had had four generators running constantly since the outage. Two have since failed and need repairs. One of the broken generators was being used as a power source for the police station.

A suspect has been arrested in Cape Town in connection with a fire that destroyed two train sets worth an estimated R33m.
News
3 years ago

"How are we supposed to deliver services to people who need them?" another officer asked.

"We don't even have bathrooms on the upper floor; the only functional bathrooms we have are on the lower floor, which is pitch black.

"You can't charge your phone at work. You have a fear of going down there cause you don't know who might be lurking down there," the officer said.

Richard Mamabolo, the Police and Prisons Civil Rights Union spokesperson, said it was disgusted by the way police management was handling the situation.

"Management does not seem to take the plight of workers seriously. The matter was raised months ago. We are aware that they are not responsible for the upkeep of the building, but they have an inherent obligation to ensure that those who work for them do so in a conducive environment," he said.

Police spokesperson Brigadier Vish Naidoo said officers who work at that station were moved to another building at the weekend.

"Management saw it as a risk and made a contingency plan to move the members," Naidoo said.

However, one of the police officers at the station yesterday said this was not true. "As we speak, I'm sitting in the station. When was this move implemented? They won't tell you because they are lying," the officer said.