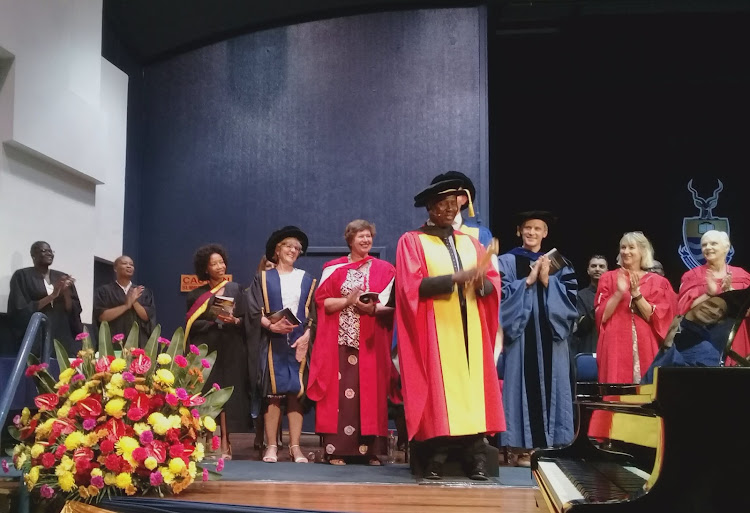 Former deputy chief justice Dikgang Ernest Moseneke was on Tuesday honoured with a doctorate in laws by Wits University for his significant political, social and economic contribution to South Africa and its people.

Moseneke, who recieved what is his third honorary doctorate, said he was choking with emotion as he thanked his wife Khabonina for supporting his extensive career for 42 years.

"My family is here. I could not have done it without you Khabonina," he said.

Moseneke, who will be turning 71 later this month, served as a deputy chief justice in the Constitutional Court from 2005 until 2016 when he retired. He has recently served as the vice-chancellor of Wits University until he handed over the baton on Saturday to Dr. Judy Dlamini who is the first black female to be honoured with the post.

"She is a very worthy successor, a great African woman who will take us places," Moseneke said.

Moseneke served 10 years on Robben Island from when he was only 15 years old for his anti-apartheid activism in the Pan African Congress. He was a founding member of the Black Lawyers' Association and is known for his work in interpreting and developing South Africa's jurisprudence and making judgments that have influenced cases all over the world.

The recent 2017 judgment he made was on the Life Esidimeni arbitration hearings where he found that officials acted unconstitutionally after 1700 mentally ill patients were forcibly moved to ill-equipped NGOs, resulting in the deaths of 144 patients.

In his acceptance speech, Moseneke commented on the lack of ethics in all spheres of society.

"Life Esidimeni is one example where people failed their Hippocratic oath," he said.

Moseneke was being honoured with master's graduates of the university in the fields of law and finance. He reminded the graduates that they were responsible for guarding the ethics of society.

"Accounting guardians went to sleep with VBS bank. As a country we are eating away at the core of ethics," he said.

"A significant amount of business practices are riddled with corruption and collusion. In my time (as deputy justice) I had two class action suits including the price fixing of bread which is a staple food," said Moseneke.

He concluded by saying that it is important for society to protect the code of ethics that allows us to relate to each other as good human beings.