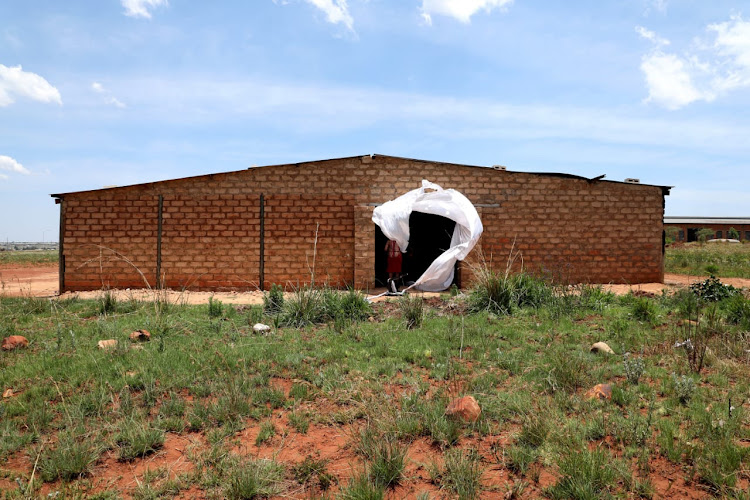 Out the vandalised church in Bronkhorstspruit.
Image: SANDILE NDLOVU

The matter against a Tshwane-based Congolese pastor accused of multiple rapes was on Thursday postponed to November 29 after his lawyer, Eric Nkwana, abruptly withdrawn from the case. Nkwana did not give reasons for his withdrawal.

The 43-year-old pastor, who cannot be named as he is yet to plead, was appearing at the Bronkhorstspruit Magistrate's Court for a formal bail application when Nkwana dropped the bombshell.

The pastor, who allegedly asked his victims to undress and sprayed them with anointing oil before attacking them, is charged with four counts of rape and two of sexual assault.

Dozens of EFF members attended the court proceedings to offer support to the victims.His arrest sparked outrage among residents of Rethabiseng township resulting in his church building being burnt down last Sunday.

Speaking to Sowetan yesterday, a 27-year-old female congregant recalled how the man allegedly raped her on six occasions. The woman said the incidents happened between 2016 and January this year.

The mother of two said the pastor would come to her home while her fiance was at work under the pretext that he wanted to pray for her. She said the first incident happened after the man offered her a lift home and later told her that she needed deliverance from demons which were attacking her womb and breasts.

"He asked me to undress and asked me to bring a container of double portion anointing oil that we buy from church. He then asked me to remove my dress and underwear. He asked me to kiss him, pushed me to the bed and raped me," the woman said.

The woman said after the attacks, he would send her sleezy messages telling her that he enjoyed her.

"I started ignoring his calls. I knew that it was wrong, but I could not stop him because I feared him. He threatened to kill people with his power during his sermons," she added, noting that she confided to a church member and stopped attending the church in September. She said she opened a case on November 13.

"I was shocked to find out that there were other victims and women who were afraid to speak," she said.

A junior pastor, whose wife was also allegedly raped, said he wanted justice for his 28-year-old wife. The 35-year-old man said at first he did not believe his wife when she informed him about the incident. The man, who cannot be named to protect his wife's identity, said the pastor attacked his wife after inviting her for a private prayer session.

"My wife told me that he asked her to take her clothes off and he sprayed her with double portion of anointing oil before raping her," he said, adding that the pastor used trickery and threats to make sure that people do not expose him.

"I was close to him and protected him. I was brainwashed."

The man, who now believes the pastor had raped many other women who were afraid to speak out against him, had since moved out of a church house.

He described the pastor as charasmatic and dazzled people with his silver tongue and flashy clothes.Another 26-year-old victim who opened a sexual assault charge said the pastor came into her room in the church's living quarters while she was bathing. She said he touched her breasts and tried to rape her.

"He ran away when I threatened to scream."