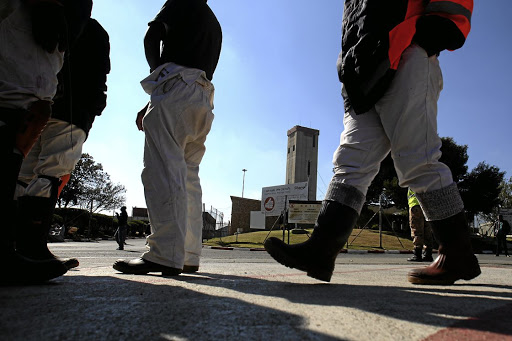 Four mineworkers were declared dead at an abandoned working area of a mine owned by Sibanye-Stillwater. A fifth miner is yet to be found.
Image: SANDILE NDLOVU

Fresh allegations of workers being sent to their deaths have emerged at a Sibanye-Stillwater mine where four mineworkers were confirmed dead yesterday.

The claims against the mine were made yesterday as rescue operations retrieved the fourth body and was searching for the fifth miner who was yet to be found.

The five mineworkers, according to the company, entered an abandoned area underground at Kloof Ikamva shaft near Westonaria, southwest of Johannesburg, on Monday.

Sibanye said a closed-off section of the shaft had poor ventilation.

A mineworker who worked with the deceased workers said the group of five was forced into the section of the shaft by their "shift boss" [supervisor].

Bodies continue to pile up at Sibanye-Stillwater mining group after three workers were found dead yesterday.
News
2 years ago

The miner, who asked not to be named, said the supervisor was also one of the four who died.

"Initially, the group consisted of six. Among them was the mine overseer, the supervisor and the safety rep. The rep refused to go into that section of the shaft because he said it was too hot and the temperature in there was 37 degrees."

The miner accused the mining company of placing more value on profit than their lives.

"That section of the shaft was closed off in 2015 after a mineworker died. The mine knows that it [the shaft] is not operational and yet they sent that group in there," he said.

He said as recently as two weeks ago, another group was ordered to enter the same section but they refused, citing safety problems.

Another miner said instructions came from the mining company.

"The shift boss forced them to go in there. But it is not his decision to make, it came from the mine. Workers cannot enter prohibited areas without the consent of the mine."

A search is under way for a fifth miner missing since Monday.
News
2 years ago

He alleged the company had a reputation of flouting safety regulations in favour or making a profit.

"If you are told to do something and you refuse you are threatened. Those guys had no choice, even their shift boss."

The mining company's Thabisile Phumo refused to comment on the allegations but said a thorough investigation would be conducted to determine why the group of miners were in the closed section.

"The miners were on duty at the time of the incident. We do not know what prompted the miners to go to that closed-off section," Phumo said.

She said the body of the fourth employee has been retrieved from the abandoned stope ore pass by the specialised proto teams.

The National Union of Mineworkers' Peter Bailey, said a total of 45 miners have died since January while Sibanye accounted for 19 of those deaths. "We understand that there was an intention to reopen the part of the shaft because there doesn't seem to be anyone who knows what those miners were doing there."