FNB stadium could collapse as a result of illegal mining explosives: Mashaba 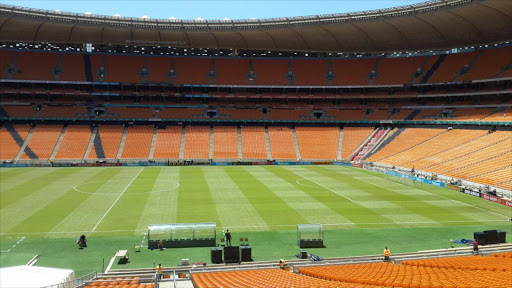 Johannesburg’s iconic FNB sports stadium could eventually collapse as a result of illegal mining in the area‚ Mayor Herman Mashaba has warned.

Mashaba said he had written to national authorities to alert them to the risks posed by explosives used in illegal mining.

“It is greatly disappointing that the City of Johannesburg has not received feedback from National Government on a matter which could ultimately lead to the loss of hundreds of lives. Of significance is the Nasrec precinct where the pipeline intersects with Sasol gas lines‚” Mashaba said.

“Investigations have revealed that if illegal mining activity continues within these old mining shafts‚ the entire FNB Nasrec precinct‚ including the iconic FNB stadium‚ could go down in ruins as a result of unstable earth directly underneath the area.”

Mashaba said he had written to former mineral resources ministers Mosebenzi Zwane and his successor Gwede Mantashe to raise his concerns‚ to no avail.

Mashaba said he had requested in November and February this year that Zwane instruct his department to provide measures to “avert a pending disaster”. He said he had asked for the information to be supplied by February 28‚ three months after his initial query.

The letter had also been sent to local government minister Zweli Mkhize‚ SAPS Provincial Commissioner‚ Lt General Deliwe de Lange and Gauteng premier David Makhura‚ “in the hopes of both informing them and receiving information from their offices should my request to the Minister Mantashe continue to go unanswered.”

“Last year‚ I have called for a collaborative crackdown operation with the Department of Mineral Resources‚ Department of Home Affairs‚ Department of Roads and Transport‚ JMPD‚ SAPS and Hawks to halt illegal mining activities‚” Mashaba said.

“I now do so again and remind my provincial and national counterparts that they took an oath to be faithful to the Republic of South Africa‚ of which the City of Johannesburg forms part. If they truly wish to perform their function to the best of their ability‚ they will tend to this matter with the sense of urgency it deserves.”

• Near gas and fuel pipelines there is an increased risk to neighbouring communities and services. • Contamination of the City’s water supply;

• Tremors‚ which threaten the structural integrity of our roads‚ adjacent residential communities and businesses (Illegal blasting can create a spark that can ignite a fire capable of incinerating a large radius of up to 300m2);

• Explosives have compromised the pillars that support decommissioned mines‚ placing additional risk on the physical structure upon which the pipelines rest.