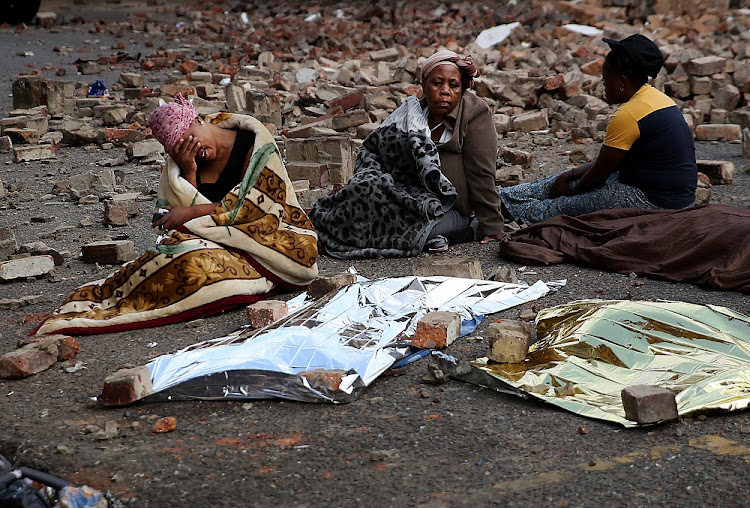 Relatives mourn the loss of young children, after a wall collapsed onto them while they were playing, in Doornfontein, Johannesburg.
Image: ALON SKUY

The MEC for Co-Operative Governance and Traditional Affairs and Human Settlements in Gauteng‚ Dikgang Uhuru Moiloa‚ on Wednesday warned against the occupation of abandoned structures and denounced exploitation of the poor by "slumlords".

He made the comments while sending condolences to the families of three children aged 3‚ 5 and 10 who died when a wall collapsed at "an illegally occupied building" in Johannesburg on Tuesday.

"It was established that the building was illegally occupied and not suitable for human habitation.

"After the bodies of the children were removed‚ Urban Search and Rescue Services‚ together with other emergency workers‚ put measures in place to have all the illegal occupants removed and the rest of the dangerous structure demolished in anticipation of further collapses‚" his office said in a statement.

Shimmering foil covered the bodies of three children who were crushed by a wall in Davis Street in Doornfontein‚ on Monday morning.
News
3 years ago

MEC Moiloa said: "It is not only sad and tragic that yet another set of children had to die under such horrific circumstances as a clear reminder of the social ills of illegal occupation."

Discouraging people from occupying hijacked or abandoned structures‚ while paying rentals to slumlords‚ he said: "Not only is this practice extremely dangerous‚ but also criminal".

The Doornfontein premises where the tragedy occurred is being shut down.

Moiloa renewed a call on property owners of private buildings to be responsible and to work with authorities in order to prevent the illegal occupation of these buildings.