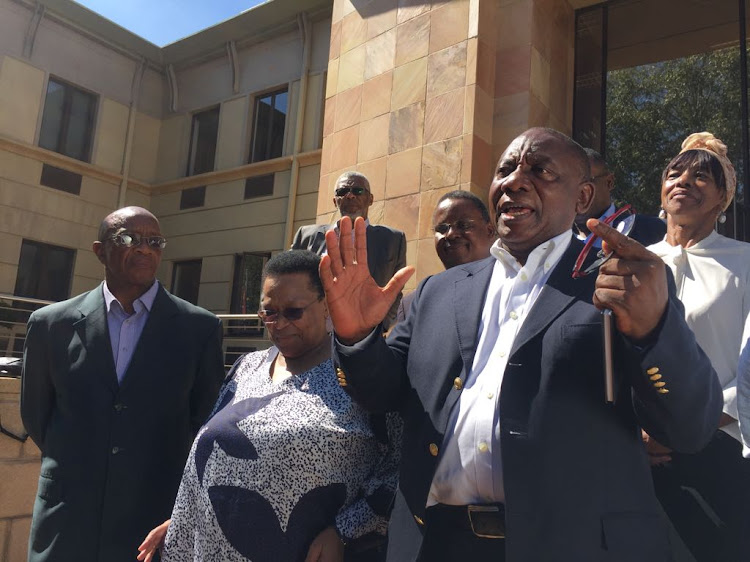 ANC president Cyril Ramaphosa has apologised to the party’s stalwarts for the ill treatment they received from his predecessor Jacob Zuma.

Ramaphosa met the veterans in Sandton on Monday for the first time since ascending to the highest office at Luthuli House.

“Well the president did talk about it and he said to us he is saddened in the manner in which the stalwarts were treated and he thinks that that is something that needs to be addressed by the NEC (national executive committee) and by the ANC and of course he said it was uncalled for because we’re easing critical issues that were affecting the life blood of the ANC,” said Veterans League President Snuki Zikalala.

“The ANC was going down the drain and we were saying, ‘not in our name while we are still alive’ and so he accepts that and he agrees that there were critical people that were saying that we should not be recognised [and] not be given recognition and he said that shouldn’t have happened,” said Zikalala.

He said the veterans were pleased that Ramaphosa was able to meet them to iron out critical issues as they are the custodians of the party's values and traditions and those values must be guarded with their lives.

The veterans also informed Ramaphosa that they still wanted a national consultative conference (NCC) before the next year's national general elections and this must be discussed by the NEC.

"The president said it will be discussed because it's very important that you should self-introspect to see what went wrong and how can we fix  things that went wrong within our own organisation so that we can regain the trust of society immediately because there is a deficit if trust with society," added Zikalala.

ANC vets distance themselves from members who have scheduled a press briefing to bring “serious allegations” against Ramaphosa.
News
3 years ago

In November last year, the ANC stalwarts held a three day NCC meeting in which the then NEC under former president Jacob Zuma distanced themselves from it.

The seasoned members of the ANC had spent the whole of 2017 attempting to host the consultative conference, with the NEC at first agreeing that it should take place, then insisting it must be done simultaneously with the June policy conference.

"We had a wonderful engagement with the stalwarts of the ANC. This was a meeting where we were reconnecting, re-engaging with our stalwarts and we were briefing them about our moment we were in now as the new leadership in the ANC and we had positive views about what needs to be done and the role that needs to be played by our stalwarts in the new dawn that we are in"," said Ramaphosa.

"Their participation in the veterans league is really going to lift the veterans league as it is going to lift the ANC to a higher level. We are a very fortunate organisation in that we have so many stalwarts who are concerned about the movement. Prior to Nasrec [policy conference], the veterans were concerned about the direction of their movement [and] they demonstrated their love for their organisation that they constituted themselves into a forum that was trying to egg us on to move in the right direction," added the president.

During his last speech in his capacity as ANC president, Zuma took a swipe at the party's elective conference in December, saying the could be "a vehicle used to cause more problems" in the ANC after they called for him to step down numerous times.