12 hours of drama as two climbers die on Table Mountain 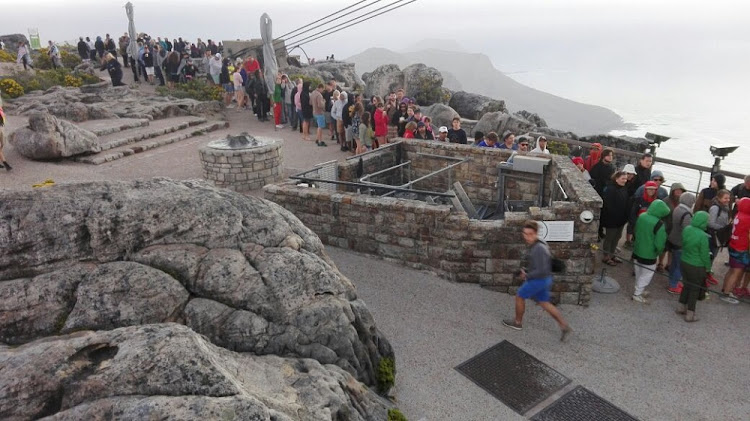 The scene on top of Table Mountain as the rescue operation unfolded.
Image: M Wilcox

A team of 30 spent 12 hours on an “extremely difficult rescue” on a Table Mountain rock face‚ Wilderness Search and Rescue said on Tuesday.

Two of the three climbers who got into difficulties on Monday on Arrow Final‚ beneath the upper cableway station‚ were declared dead by paramedics lowered from a cable car. They were a man and a woman.

The only survivor‚ another woman‚ was winched into the cable car and taken to hospital. The names of the two women — both foreigners — and the man have not yet been released.

About 800 tourists were stranded on top of the mountain until the early hours on Tuesday when the cable car was halted during the rescue.

Marais said the alarm was raised around 5pm on Monday when cable car passengers reported seeing climbers “hanging on ropes” on Arrow Final‚ a face first climbed in 1897 and graded 11 on a scale of difficulty that ranges from 5 to 38.

“One report said one of the climbers was administering CPR [cardio-pulmonary resuscitation] on one of the others‚” said Marais.

Marais said the rescuers’ first task was to ascertain which of the climbers was alive and needed assistance. “Each of them was on their own rope and two of them were together‚” he said.

“Paramedics were lowered and we ascertained that two of the three were dead. We then decided that we would only continue to rescue the survivor‚ so that the cable car could be used to take all the waiting people down.”

“There are two climbers dangling from ropes below the upper cable station at least 150 meters down."
News
3 years ago

The two bodies were secured and by 2am on Tuesday the cable car was available to retrieve the bodies‚ he said. “By 5:15am I had a report to say the last person on the rescue team was safely back in the cable car.

“It was an extremely difficult rescue‚ especially because we had to do it at night.”

Marais was not able to comment on the nature of the climbers’ injuries and whether they were experienced or adequately equipped.

“Falls are possible on the mountain in many circumstances‚” he said. But had the climbers not been on ropes‚ he said‚ they could have fallen some 300 metres.

A chef from Johannesburg died in 2015 when he fell 200 metres from Arrow Final.

According to the South Africa Mountain Accidents Database‚ at least 131 people have died on Table Mountain since 1980. One of its deadliest years saw 15 people killed in 2009.

Wilderness Search and Rescue technical experts were called in on Tuesday to rescue a dog trapped on Lion's Head.