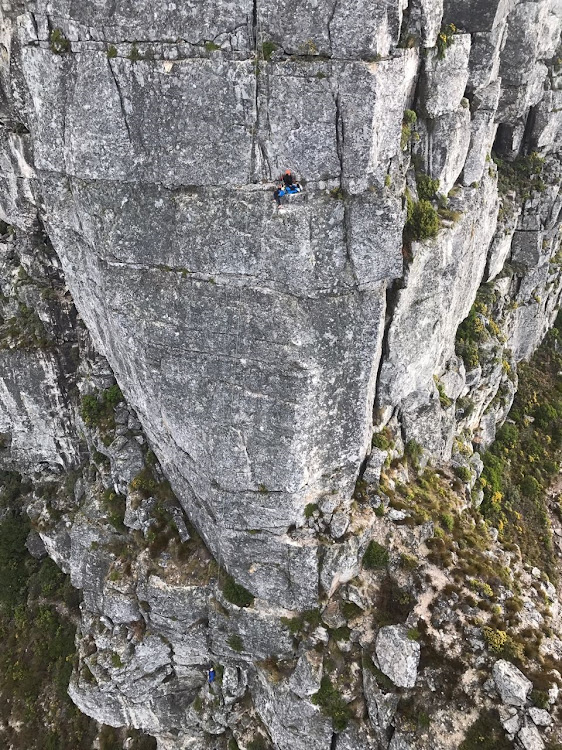 The climbers dangling on ropes as seen from the Skymed rescue helicopter.
Image: D Tromp

A dramatic rescue operation unfolded overnight to reach three climbers involved in an accident – two of whom were later declared dead – below the upper cable car station on Table Mountain.

Hundreds of tourists waited on top of the mountain for hours as rescuers used the cable car to reach the trio who were reportedly climbing Arrow Final.

“There are two climbers dangling from ropes below the upper cable station at least 150 meters down. A third person‚ also on a controlled rope‚ is administering CPR to one of the persons‚” said Wilderness Search and Rescue spokesman Johan Marais on Monday evening.

“In order to gain access to the injured climbers‚ rescuers are making use of the cable cars from which a rope system has been rigged to lower medical and rescue personnel.”

Two of the climbers‚ a man and a woman‚ were subsequently declared dead. Their bodies were secured to the side of the mountain for the duration of the night. An injured woman was brought to safety in the cable car.

There were approximately 800 people still on the mountain after 10pm who were then brought down in the cable car. The rescue team resumed the operation at first light on Tuesday and the bodies were taken off the mountain by 5am.

A motorbike rider who fell down a mountain in Limpopo was airlifted to hospital with serious injuries by the South African Air Force.
News
4 years ago
Next Article