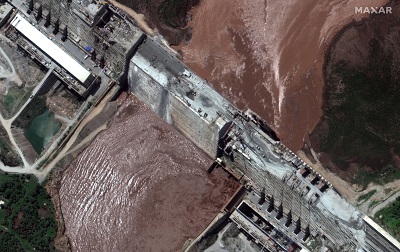 Egypt said last month it had received official notice from Ethiopia that it had begun filling the reservoir for a second time and said it rejected the move.
Image: Satellite image ©2020 Maxar Technologies via REUTERS/ File photo

Ethiopia has nearly completed the filling of a huge dam on the Blue Nile river for a second year, state media reported on Monday, a move that has already angered Egypt.

Addis Ababa says the Grand Ethiopian Renaissance Dam (GERD), a $4 billion hydropower project, is crucial to its economic development and to provide power.

But is has caused concern over water shortages and safety in Egypt and Sudan, which also depend on the Nile's waters.

“The second filling of the Grand Ethiopian Renaissance Dam will be completed in few minutes,” the Ethiopian Broadcasting Corporation (EBC) reported on Monday.

Egypt said last month it had received official notice from Ethiopia that it had begun filling the reservoir for a second time and said it rejected the move.

Egypt views it as a grave threat to its Nile water supplies, on which it is almost entirely dependent. Sudan has also expressed concern about the dam's safety and the impact on its own dams and water stations.

Long-running diplomatic efforts to resolve the dispute between the three countries have yielded little success.

The US has also said Ethiopia's filling of the dam had the potential to raise tensions and has urged all parties to refrain from any unilateral actions.

Tunisia has proposed the UN Security Council push for a binding agreement between Ethiopia, Sudan and Egypt on the operation of a giant hydropower ...
News
6 months ago

Egypt and Sudan on Saturday rejected an Ethiopian proposal to share data on the operations of its giant hydropower dam on the Blue Nile after ...
News
9 months ago

Ethiopia, Egypt and Sudan have agreed to resume talks to break a deadlock on the Grand Renaissance Dam reservoir on the Blue Nile, the leaders of the ...
News
1 year ago
Next Article