'Genocides do not start with violence but hateful rhetoric' - experts 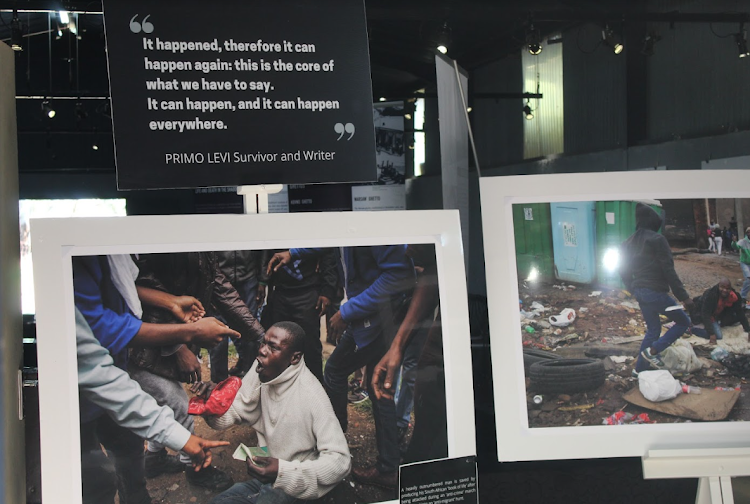 One of the displays at the Holocaust and Genocide Centre museum in Howick.
Image: Supplied

Holocaust experts in SA have sounded the alarm over similarities between the rise of xenophobic sentiments in the country and genocides throughout history.

“There’s a very natural connection between learning about the Holocaust, thinking about our own country’s past and confronting this epidemic in our country at the moment which is xenophobia,” said Claudia Blythe, education manager at the Durban Holocaust and Genocide Centre.

Blythe was speaking to SowetanLIVE's sister publication TimesLIVE at the Mandela  Capture Site, Howick, just outside Pietermaritzburg, where the centre was conducting a series of workshops for different schools in the area.

With Holocaust education incorporated in the grade 9 and 11 history syllabus, the Holocaust and Genocide Centre decided to bring their museum experience to three high schools in the Midlands: Howick High, Mconjwana High and Sibongumbovu combined school.

The focus of the workshops is on how history is full of tales of careless messaging left unchecked and festering and dangerous beliefs where one group of people assumes superiority over another, leading to dire consequences that leave lifelong scars.

From the Holocaust — the attempt by Adolf Hitler’s Nazi party to exterminate Jewish people, first in Germany then in the rest of Europe — to the 1994 Rwandan war between the Tutsis and the Hutus and SA’s own apartheid.

The Holocaust and Genocide Centre said its message was clear: “Those who do not learn from history are doomed to repeat it.”

“Most of the time we start with prejudice or how we think about people who are different to us. Then usually there’s some form of discrimination against a group of people, if enough people harbour that prejudice. That discrimination can lead to violence against that group of people because they are vulnerable,” said Blythe.

Peter Houston, also an educational manager at the centre, said a common thread in all these separate atrocities is “othering” —  a pattern of exclusion and marginalisation based on having identities that are different from the norm.

“It happens every day — you are in this group and I’m in that group. It’s the way that life has been gathered: these patterns,” said Houston.

“But 'othering' can be very destructive when it takes root in prejudice. When one group thinks they are superior and another is inferior.”

I will resign once all foreign ‘rascals’ are locked up and keys thrown away: Aaron Motsoaledi

A video of home affairs minister Aaron Motsoaledi launching a stinging attack on illegal foreign nationals is spreading on the internet.
News
3 months ago

Detailing the relevance of learning about the Holocaust, Blythe said it can help SA understand it’s own past better and “unpack our prejudices and how we feel about people that are different to us.”

She compared the way the Nazis scapegoated minorities for social ills in Germany to how South Africans do the same to foreigners.

“We’re looking at issues where people are blaming foreigners for the lack of job opportunities, poverty we’re experiencing and in many ways we see that happening in Nazi Germany — a minority group (the Jews) being blamed for hyper inflation and poverty in general. That scapegoating can be dangerous,” she said.

“Also the dangerous language, comparing foreigners to cockroaches and rodents which again is a language of genocide: dehumanising people.”

Houston said the violence against foreigners from other African states is a modern day example of “othering”.

“Operation Dudula started off as targeting illegal African foreigners: ‘those who are taking our jobs, creating crime, causing all the problems.’ This week it shifted to ‘we’re also going to target legal foreigners who are doing manual work.’  So a step has gone in that road of viewing others in another way.”

Blythe said Dudula is a dangerous movement as it singles out foreigners as a problem that needs to be removed from society.

“These are stereotypes about foreigners. They lead to violence because what we know is that words have power. When you speak like they are not human beings, it’s dangerous. It’s not all talk, people are targeted because of their identity,” she said.

“That Afro phobia is becoming an epidemic here. So we would like people to think critically about what they’re being told about foreigners because even if every foreigner in Africa had a job, we would still have a huge unemployment crisis.”

However, Operation Dudula has always maintained it is a non-violent movement.

Blythe added that they are in constant contact with foreigner and refugee groups in the country.

She said they have heard stories of the hate and threats of violence foreigners are confronted with on a daily basis, sometimes to such an extent that they can’t speak on a taxi because they are afraid of being identified as foreigners.

“Their stories are very powerful and we want to shed light on them.”

She said the importance of speaking out on these issues is heightened by the silence of leaders entrusted with powers to do something about these issues.

“All it is really is raising awareness of what can happen when prejudice and hate speech are left unchecked and leaders are quiet. That implies that you agree. What we are seeing now is silence from our leaders about these issues of xenophobia and that silence is very loud.”

Blythe said she was hopeful the workshops would be more than just a history curriculum but something pupils would be able to take home with them and make them critical thinkers.

“We hope that through the workshops they can understand how it’s possible for violence and genocide to happen. How all of these histories begin with something so small which is just the way you think about other human beings, as well as be able to challenge their own prejudices.”

Houston said the museum sought to be “the custodian of memory” on the Holocaust and other genocides.

“Our hope is that as much as you learn something and honour the memory, you also take something home that you can apply in your own life.”