'When we lost our way, you took us to task,' Ramaphosa tells Tutu on his 90th 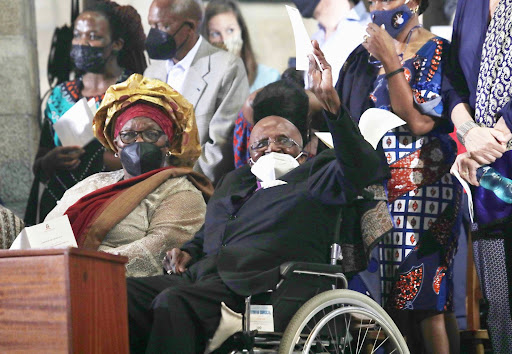 “At times when we have found ourselves losing our way, you have taken us well to task.”

These were the words President Cyril Ramaphosa extended to Archbishop Emeritus Desmond Tutu during his 90th birthday celebrations on Thursday.

He said that during the nearly three decades after the liberation of SA Tutu had provided “moral and ethical guidance” to the nation.

Tutu was a leading figure during the struggle for the liberation of SA from the apartheid regime.

He received the Nobel Peace Prize in 1984 and was later the chairperson of the Truth and Reconciliation Commission. He was the second South African to win the Peace Prize after ANC president Albert Luthuli in 1960, also for his role in the non-violent struggle against apartheid.

“For nearly three decades, yours has been a voice of conscience, guiding us and motivating us to do better by our people,” said Ramaphosa.

In a 2013 Mail & Guardian article, Tutu said he would no longer be voting for the ANC, stating that SA was losing the moral high ground it had gained during its “altruistic” fight against apartheid.

“I have over the years voted for the ANC, but I would very sadly not be able to vote for them after the way things have gone,” he said at the time.

In 2011 he called a press conference in which he lambasted former president Jacob Zuma’s government for failing to grant his close friend, the 14th Dalai Lama, a visa to visit SA for Tutu’s 80th birthday celebrations.

It was the second year in a row in which the Dalai Lama was denied a visa and speculation was rife that the South African government was pressured by China, which views the Dalai Lama as a dangerous political dissident, not to let him into the country.

Ramaphosa said, in a statement by the presidency, that he acknowledged the “moral and ethical guidance Archbishop Tutu has provided to the nation after liberation.

“The president pays tribute to Archbishop Tutu for his role as a fighter in the cause for  human rights, for equality and for social justice in the 59 years since his ordination.

“You continue to remind us that fellowship, solidarity, charity and compassion for the vulnerable are values common to us all, and we should strive to live by them each day.

“We are further reminded that taking up the struggle for equality and social justice is not the responsibility of only government, civil society organisations or the clergy, but of us all,” he said.

Ramaphosa expressed his deep regard to Tutu for “a life that has been well-lived in honesty, integrity, fearlessness and service to humanity in South Africa and globally”.

He wished Tutu good health, fellowship and companionship with those close to him.

Defacing of Tutu mural a reminder that curse of racism still exists in SA: Ramphele

'For this hatred to be repeated, decades later, on a mural of the archbishop in central Cape Town, casts a slur on our democracy.'
News
2 months ago
Next Article