Taxi operators could be deregistered or have their licences revoked should they be found guilty, says provincial transport department 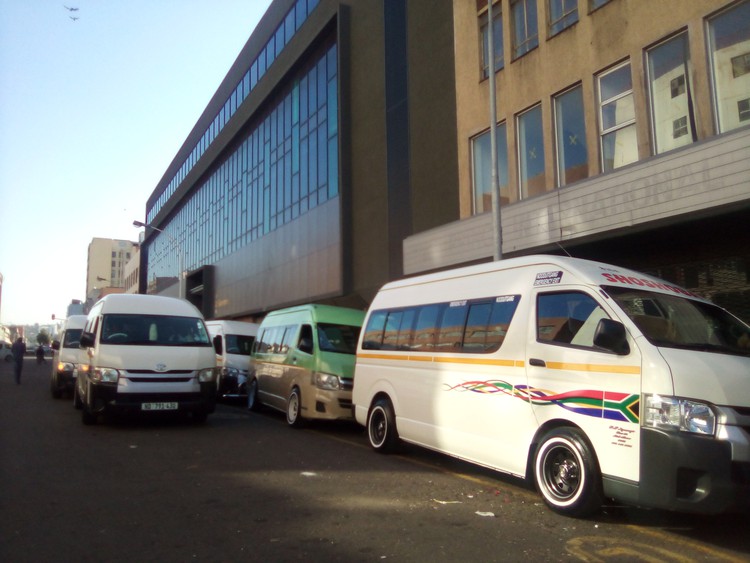 Taxi operators in Gugulethu are being accused of running a rogue operation by holding other minibus drivers and e-hailing drivers to ransom to stop them transporting passengers in the area.
Image: GroundUp/Nokulunga Majola

Taxi operators in Gugulethu are being accused of running a rogue operation by holding other minibus drivers and e-hailing drivers to ransom to stop them transporting passengers in the area.

In a recent incident on October 1, a driver who works at the Desmond Tutu Health Foundation was held to ransom at the Gugulethu taxi rank and forced to pay R3,000 to be released.

The driver, who has asked that his name be withheld because he fears for his safety, told GroundUp that he was fetching staff from the Vuyani Clinic in Mzimkhulu S Dakuse Street when a Toyota sedan pulled up next to him.

The driver said one of the sedan’s two occupants asked him what he was doing in the area and he replied that he was there to collect staff.

“I even explained the kind of work I do and I showed them my work identification card around my neck. The man then asked if I know that I am supposed to report to the taxi rank to get permission to transport. I told him that I’ve been doing this work for three and a half years and this has never happened,” he said.

The driver was instructed to follow the Toyota. When he refused, the two occupants of the sedan got out of their car and into the back of his minibus. Fearing for their lives, the staff who were seated in the van at the time, told the driver to just drive to the taxi rank.

Three men were shot dead at a taxi rank in Khayelitsha, Cape Town, on Monday.
News
2 years ago

As soon as he pulled into the rank, other taxis and cars parked him in, making it impossible to leave.

“I asked one of the female staff members to accompany me into the office to translate. Inside, we were greeted by what I assume is the big taxi boss who was sitting at a table. I greeted him and asked what the problem was,” he said.

“He said that since Covid-19, their business had taken a financial knock. So therefore they do not allow any companies to collect staff members from surrounding areas which include Gugulethu, Mfuleni, Khayelitsha and Kraaifontein,” said the driver.

The driver said the taxi boss then demanded that he hand over his keys or pay R3,000. When he refused again the man brought the fee down to R1,500. He was instructed to call his boss to pay the ransom.

The driver said he phoned his manager who in turn contacted the police. About 30 minutes later, police arrived.

“They started talking and negotiating, and at this point more taxi operators had come into the office. While all of this was happening, another driver came in ‘to pay a fine’ right in front of the police members who did absolutely nothing about it,” said the driver.

The driver and staff were allowed to leave three hours later, without any ransom being paid.

When GroundUp contacted Besuthu Ndungane, spokesperson for the Congress of Democratic Taxi Association which operates at the Gugulethu Taxi Rank, he said: “Listen sisi I am occupied. I don’t have time to talk about such.”

Gershon Geyer, provincial spokesperson for the South African National Taxi Council, said he was not aware of any extortion and impounding of vehicles by taxi operators.

Andile Seyamo of the Cape Amalgamated Taxi Association said: “This could be true because no-one has the right to operate on a route that is not theirs ... All routes are registered under different taxi associations and no-one can just operate there and claim that they are transporting staff. It will not be welcomed.”

Ntomboxolo Makoba-Somdaka, spokesperson for provincial department of transport and public works minister Bonginkosi Madikizela, said: “When individuals linked to the taxi industry are involved in criminal acts such as extortion, intimidation and murder, the department supports the police and the National Prosecuting Authority (NPA).”

Makoba-Somdaka said the police and the NPA had been asked to prioritise cases like this. She warned that should any association or operator registered with the Provincial Taxi Registrar be found guilty of such criminal acts, they could face deregistration or have their licences revoked.

Makoba-Somdaka said they would discuss the matter with taxi bosses at the provincial lekgotla on Thursday.

Wayne Dyason, spokesperson for the city’s law enforcement, said they were aware of similar incidents happening in Kraaifontein. “Our traffic officers will also look out and deal with it as we come across it. SAPS must investigate,” said Dyason.

Asked whether Gugulethu police received any complaints or extortion cases involving taxi operators, police spokesperson André Traut described a similar case on September 29 where an e-hailing driver was approached by four men in a gold Toyota Corolla in NY1 Gugulethu.

“They told him that he was not supposed to operate at that time, and instructed him to drive to Eyona Taxi rank where they impounded his vehicle and told him that he must pay a fine of R1,500. A case of robbery was opened and is being investigated. The suspects are yet to be arrested,” said Traut.