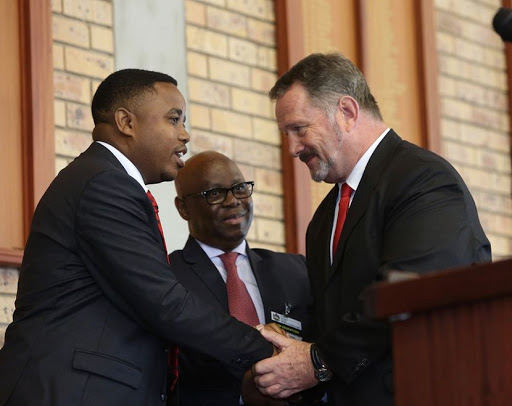 KwaZulu-Natal Education MEC Mthandeni Dlungwana wished Maritzburg College pupils well ahead of their matric exams as an independent probe into allegations of racism at the prestigious school continues.

“This school has been in the news‚ but notwithstanding that‚ we are here to let you know that you have our support‚” he said on Tuesday.

The department instituted a “full-scale investigation” after receiving a number of allegations relating to racism. This after three pupils at the college created a stir recently by posting a picture online of themselves holding EFF T-shirts‚ bearing the words: “EFF‚ our last hope of getting our land back.”

The school launched disciplinary action against the teens and charged them with contravening the Schools Act of 1996. The charges have been put on hold‚ pending the outcome of the department’s probe.

On the start of the exam schedule‚ Dlungwana said that a number of academic programmes had been introduced to address the province’s under-performing schools.

“Our system is ready and this is a school that performs very well. We wanted to show the learners that they have our support and we want them to deliver on their academic potential‚” he added.

“We are confident that‚ given the changes we have made‚ the school system in KZN will perform well and our pass percentage will increase from 66 to 77 for 2017.”