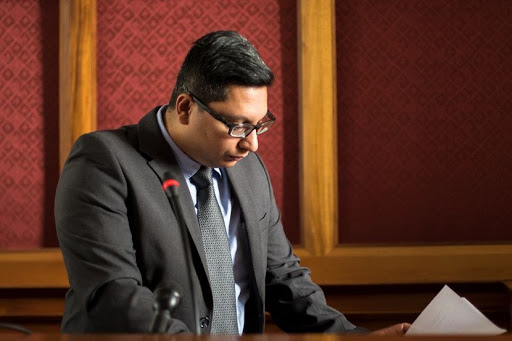 Murder accused multimillionaire Jason Rohde’s defence team laid into forensic pathologist Dr Akmal Coetzee-Khan on Wednesday for “questioning the professional integrity” of a pathologist hired by the defence to conduct a second autopsy.

After being given almost two days to prepare‚ advocate Graham van der Spuy started a gruelling cross-examination of Coetzee-Khan‚ who conducted the first autopsy and also inspected the scene where Rohde is suspected of staging his wife Susan’s suicide at Spier wine estate near Stellenbosch.

Rohde claims Susan locked herself in their hotel bathroom and hanged herself using the electrical cord of a hair ironing tool in July 2016‚ after a physical altercation between them at the Lew-Geffen/Sotheby’s International Realty annual conference while Rohde was CEO of the company in South Africa.

A seasoned forensic pathologist with more than 60 cases on his CV‚ Coetzee-Khan stood his ground under aggressive questioning by Van der Spuy‚ whom Judge Gayaat Salie-Hlophe asked to stop interrupting her and the witness.

Last week Coetzee-Khan criticised the report of an autopsy conducted by defence pathologist Dr Reggie Perumal for omitting crucial evidence about the cause of death‚ saying it would “mislead the court”.

On Wednesday Van der Spuy said Coetzee-Khan had “cast aspersions on the quality of [Perumal’s] examinations”.

Coetzee-Khan agreed to the statement‚ based on the fact that Perumal had not mentioned blood found in Susan’s stomach and small intestine and haemorrhaging next to her thyroid bone which Coetzee-Khan said indicated that the cause of death was not suicide by hanging‚ as Rohde claims‚ but manual strangulation.

Van der Spuy also questioned whether Coetzee-Khan was qualified to say whether Susan suffered from “battered wife syndrome”‚ and even asked Khan to produce his letter of appointment so he could “test its validity”.