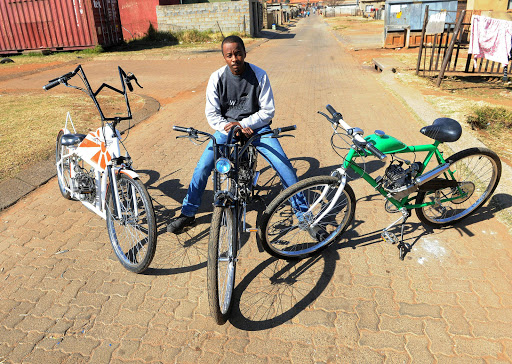 A township inventor who has created a motorised bicycle says he fears having children of his own because he currently has no stable income.

Nkosana Madi, 33, who hails from KwaThema on the East Rand, designs and makes bicycles.

He said his bicycles were powered by a motor similar to the one that runs a petrol engine lawnmower.

The speed of his bicycles depend on the design of the frame, with the smaller and lighter bicycle being able to reach 50km an hour while the biggest frame can reach 35km, he said.

Madi is part of the Department of Science and Technology's Grassroots Innovation Programme that seeks to identify and assist inventors with no academic background and who operate outside formal institutions.

With matric as his highest academic qualification, Madi said his motorised bicycle idea was sparked in 2012 when he saw factory labourers from KwaThema riding to work in Springs on bicycles.

" I have since produced five bikes, two of which I have sold to locals," he said .

He said he sourced the bicycle motors from a dealer based in Cape Town, who imported them from overseas.

"A motor constitutes 50% of the overall cost of the bike, but there are plans with the Department of Science and Technology to try to produce the motors.

"We also have plans to produce electric motors in an attempt to go green but the drive hub, battery and the connections would, without the bike, cost the same price as a complete petrol bike. So, for now, to import electric motors would not be cost effective, especially for my target market."

He produced the bicycles from a two-bedroom house that belongs to his unemployed mother and uncle. He lives in one of the backyard rooms.

"My biggest fear is to have a kid and not be able to provide him or her with basic necessities," he said.

Madi said he had a steady girlfriend and hopes to get married when the "time is right".

As the bicycle business was yet to generate a sustainable income, he makes cash by being a DJ, specialising in old school hip-hop. Madi said his aim was to have a production plant that can create 100 bikes a month.

"If I could have a clientele which I could supply 100 bikes a month, that is going to require me to have a bigger working space, employ people and that would result in the project having longevity."

He planned to roll-out a marketing campaign at the end of next month that would be targeted at companies. "We are going to approach companies and say buy the bicycles for your lowly paid workers."