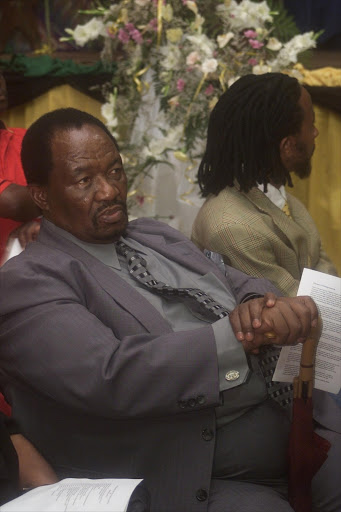 - Actors and actresses of high note paid their last respect to the most respected and experienced actor of all times George Lekwane Lamola was laid to rest at Roodepoort Cemetery. He is survived by his wife Grace and three children. He died after a short illness and he was 51 years old. In the picture Washington Sixolo was amongst the actors who paid their last respect. PHOTO:WATSON MCOTELI

Sixolo, who starred as Nobobwire's husband in the SABC1 show for years, died on Sunday after a long illness.

According to his daughter Lindelwa Sixolo, the late TV and film actor had been sick for some time struggling with multiple sicknesses.

On Saturday, he became seriously ill and was rushed from his Soweto home in Orlando East to Chris Hani Baragwanath Hospital, where he died the following day.

"My dad has not been okay for some time. On Saturday he became serious and we rushed him to hospital where he died the next morning," Lindelwa said. President of the Creative Workers Union of South Africa Mabutho Sithole described Sixolo as a humble and funny person.

"Bra Wash did not have to try hard to be funny, he was born with it.

"I worked with him in different productions. This year, I have seen him many times and we laughed a lot."

Sixolo, 83, whose last appearance on TV was on Emzini Wezinsizwa, started acting in the late 1970s. In 1983, he won a Tonight Acting Award.

He also acted in television series Shaka Zulu where he played the role of Bhebhe.

He appeared in Jackie Chan's film Who Am I? as a chief.

Sixolo's other credits include comedies Ernest Goes to Africa, Velaphi, Going Up and Friends.

He was born in Payneville in Springs on the East Rand.

He was the founding member of the Kings Messengers Quartet, an all-male a capella Christian faith music group that was big in the 1960s.

Sixolo's memorial service will be held Uncle Tom's Hall in Orlando on Thursday.

Details of the funeral will be announced during the course of the week.