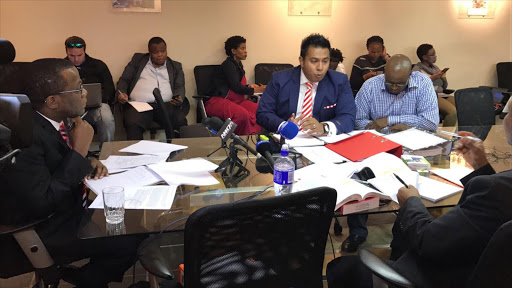 “Genuinely sick” Sibusiso Chonco‚ an accused in the Nkandla disciplinary hearing‚ had his head bowed for full 3-minutes-49-seconds it took for disciplinary hearing chair Thulani Khuzwayo to read out a ruling over whether or not the case against the public works official would go ahead.

He blinked his eyes intermittently‚ and then closed them in sheer relief when Khuzwayo granted his request to postpone his hearing due to ill health.

Clad in jeans‚ chequered shirt and thick-framed glasses‚ Chonco sat timidly next to his legal representative Adrian Moodley as he endured a two-hour argument between him and national department of public works representative‚ Clement Kulati. Occasional he would rummage through a plastic bag‚ fumbling for his medication‚ and pour himself a glass of water to down the drugs.

Khuzwayo said the application of the adjournment is merely based on the medical notes that the employee presented at the hearing.

He said that‚ in his view‚ the medical records were unclear about whether the medical condition the employee is suffering — which included depression‚ “sedation” from medication‚ inability to concentrate and forgetfulness — preclude him from attending a disciplinary inquiry. But‚ he said‚ it was in the interest of fairness that a postponement was allowed.

Chonco is one of 10 public works officials charged‚ broadly‚ with flouting tender processes that saw controversial architect Minenhle Makhanya awarded the contract for the upgrades to President Jacob Zuma’s Nkandla homestead. He was to be the first of the officials to face disciplinary action — which could result in him being fired if found guilty — but on Monday‚ Moodley requested a postponement due to Chonco illnesses.

However‚ Khuzwayo and the department’s lawyer‚ Kulati‚ had not been convinced saying this was not a good enough reason for the postponement – and also called into question the veracity of his sick note.

“The public is going to start asking questions as to why these disciplinary hearings are not proceeding. The public has been waiting‚” said Kulati.

But Khuzwayo‚ while critical of Chonco’s application for a postponement‚ said a brief delay was the best approach.

“It would seem rather prejudicial to the employee if these proceedings were proceeded with in his present condition‚” said Khuzwayo in his ruling.

“In my view the employee seems to be genuinely sick. I therefore think that the employee should be afforded the opportunity to present his case in these proceedings when and if he’s in a proper condition to do so. I therefore grant the application for further adjournment‚” added Khuzwayo.

Prior to the ruling‚ Chonco spoke only briefly after being addressed directly by Khuzwayo in a tense moment that had journalists and officials at the department’s offices in the Durban CBD enthralled.

“Sir‚ I’m sick. I’m not okay‚” Chonco said after Khuzwayo asked whether he wanted proceedings to go ahead.

While Chonco’s matter has been posted until July‚ his colleague‚ Jayshree Pardesi — director of key accounts management — will appear on June 1 and 2‚ also at the public works office in the Durban CBD.