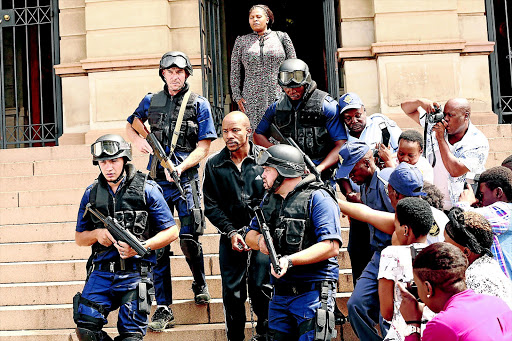 Mduduzi Mabaso, handcuffed, plays the role of the late heist kingpin Collen Chauke in the film 'State Enemy no.1'.

The dramatic life of cash-in-transit heists mastermind Collen Chauke has been turned into an action film.

Chauke, a former member of the ANC's armed wing Umkhonto weSizwe, became infamous when he was arrested in connection with a R12.6-million robbery from the SBV cash depot in Pretoria in October 1997.

Police further linked Chauke to 17 murders and 30 robberies in which R82-million was stolen.

Titled State Enemy No.1, the local film is produced by Elvis Nkosi and directed by Zuko Nodada.

Nkosi, who is doing a feature film for the first time in his career, told Sowetan that he was always fascinated by Chauke's story and wanted to tell it.

He started doing research in 2009, interviewing police officers who worked on his cases. He pointed out that it took longer to finally shoot the film due to lack of financial support from different institutions.

He said, through the film, he tells the story of Chauke, how he grew up and his life in Angola as an MK cadre. "We follow his life and how it was like in exile.

"The story touches on his return to SA after apartheid ended. It follows his life after his return and what led him to form a gang and start the robberies.

"It will show his arrest and life in prison. The film will also highlight Chauke's life of booze and women."

Chauke died in 2003 at Kalafong Hospital in Atteridgeville, west of Pretoria, of an unknown disease. While in prison in 2000, he converted to Islam and decided to change his name to Shiram Iman Dawood.

The film is funded by the Department of Trade and Industry, M-Net, National Film and Video Foundation and the National Empowerment Fund. Nkosi has previously produced films for Mzansi Magic and specialises in shooting music videos.