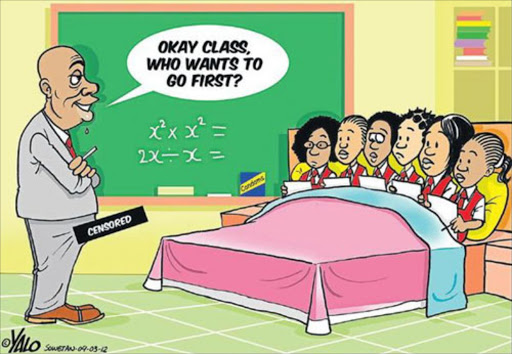 A crisis committee has been formed to calm tensions at the Mpephosi High School in Empangeni‚ northern KwaZulu-Natal‚ after parents brought teaching to a halt over claims that teachers were sexually assaulting pupils.

This is the latest in a string of allegations against schools in the province. In response to a question by DA MPL Mbali Ntuli‚ the education department revealed that‚ between November 2014 and November 2016‚ 20 teachers or principals were suspended on sexual abuse charges. Mpemphosi was not one of the schools included in the response to Ntuli’s questions.

Teaching has been disrupted at the school since Tuesday‚ after parents went to the school and accused the principal of protecting errant teachers.

Department spokesman Muzi Mahlambi confirmed that teaching also had to be called off on Wednesday as the protests continued.

“Our officials‚ together with SAPS‚ went to the school [on Wednesday]. A crisis committee was established to deal with this matter of bringing the school back to operation. We are also‚ as a department‚ conducting our own investigations into the allegations‚” said Mahlambi.

He added that parents were being encouraged not to disrupt the school‚ saying this should be the last option.

“We are capable of dealing with issues where we are supposed to do so‚” he said.

The IFP has echoed this call‚ urging parents to allow teaching to continue.

“We have raised our concerns many times in the past about allegations of learner-teacher relationships that is affecting education and has led to young girls being exploited by educators. We now find the situation where the parents who claim to have exhausted all avenues to put an end to this relationships between teachers and learners. Whilst we respect the parent’s desire for quality education for their children we would advise that teaching and learning at the school should not be disrupted‚” said MPL Thembeni Madlopha-Mthethwa.

She also took aim at the principal and the department.

“It is most troubling that the principal of the school is alleged to be protecting those teachers involved in these affairs with school girls. If this is found to be true‚ severe action must be taken against the principal. We also question what role officials from the Department of Education in that district and circuit are playing in order to bring stability and investigate these allegations by the parents.

“Department officials have a responsibility to ensure that there is no disruption to education and any allegations levelled against educators must be investigated without delay. The future of our children is at stake and therefore we demand that the department of education must resolve this matter without any further delay‚” she said.