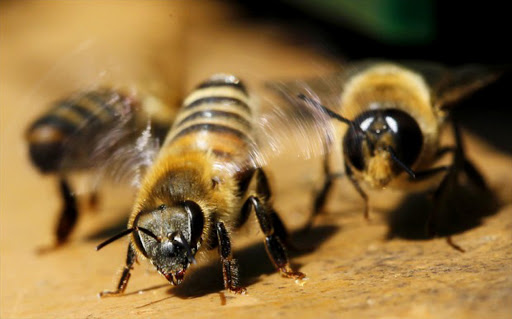 Pierre Hefer‚ who saved the third Pink ODI at Wanderers Stadium by clearing a swarm of bees that congregated on Quinton de Kock’s helmet on Saturday‚ has described the episode as his “15 minutes of fame”.

The third ODI between South Africa and Sri Lanka was disrupted for nearly an hour as a result of the bees.

“I never thought in my lifetime that I would have an audience like this in front of 20 000 people. When I arrived on the field in my uniform‚ there was a loud cheer and it was definitely 15 minutes of fame‚” he said bursting in laughter.

Hefer‚ who has been practicing beekeeping as a hobby for the past three years‚ said he was watching the match at home in Emmarentia when he saw the problem and he took it upon himself to rush to the stadium to lend a hand.

“I suspect that the swarm was moving from one place to another and it picked the Wanderers to settle down and regroup‚” he said.

“When I saw the ground staff using a fire extinguisher was when I realised that there was no immediate plan to solve the problem. I got in my car and thought if the problem was not solved by the time I got to the stadium then I could give a hand.”

‘When I saw the bees on television‚ it looked like there was about 5000 of them but we managed to capture about 2000 and most of them moved away.”

Hefer decided to rush to the stadium without a ticket but he managed to negotiate with security officials so that he could drive as close as possible to the entrance with his equipment.

“I did not have a ticket and when I arrived right at the top of Oxford Street they asked for it‚ and I told them that I needed to get into the stadium as soon as possible.

“They saw my kit and equipment and they realised what was going on inside the stadium. I managed to get into the ground without a parking ticket or official accreditation.

“I had to manoeuver the car all the way next to the stadium and I think from the top of Oxford to inside the field it took me about five minutes‚” he said.

Though beekeeping is a hobby for him‚ Hefer is registered and he has been doing it for about three years. He used honey combs to attract the bees as he did not have a queen bee.

“I had some combs because I have clearing some hives during the week‚ which had some honey on them and that attracted them because the smelled the honey.

“But if there is a queen bee it makes things simple. I think the swarm was either disturbed because bees don’t just move around like that or they were scouting for a new spot.”