Four pupils squeezed at a desk 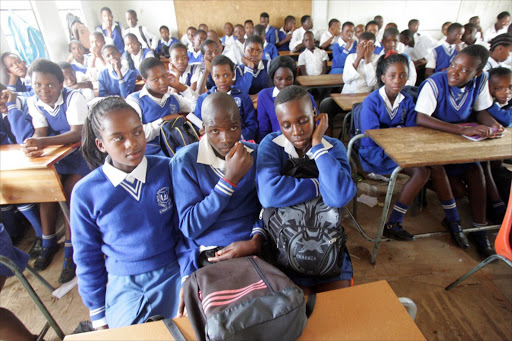 Chairman of the school governing body at Makgongoana High School, Arthur Magoro, said the number of pregnancies at the school last year was a shock.

"It was very bad. We called a parents' meeting because these things happen outside the school."

He said teachers also struggled as they would have to stop lessons to help a pregnant pupil if they got sick in class.

Magoro said the school called in social workers to hold workshop with the pupils.

He said they did not blame the school's poor performance entirely on the high pregnancy rate as there were other factors which contributed, including the overcrowding of classes.

Magoro said the school had nine classes with some having to accommodate 90 pupils at a time. The school has a total of 855 pupils this year.

When Sowetan visited the school yesterday one of the Grade 8 classrooms appeared overcrowded with up to four pupils squeezed together at a desk meant for two people.

The staff room was crammed with books, stationery and boxes while part of the ceiling was damaged.

Yesterday, Department of Basic Education spokesman Elijah Mhlanga said the school's case was a reflection of a widespread problem in the country.

"The law says we can't kick them [pregnant pupils] out of school but it becomes a huge burden on our teachers," he said.

Spokesman for the provincial health department Derrick Kganyago said sexual reproductive health services were part of the intergraded school health services, however, most SGBs did not agree with the distribution of condoms and other contraceptive methods at schools. -