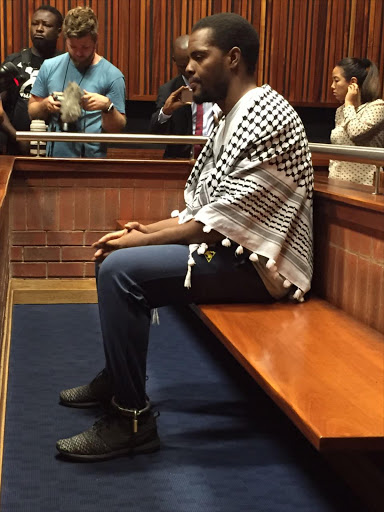 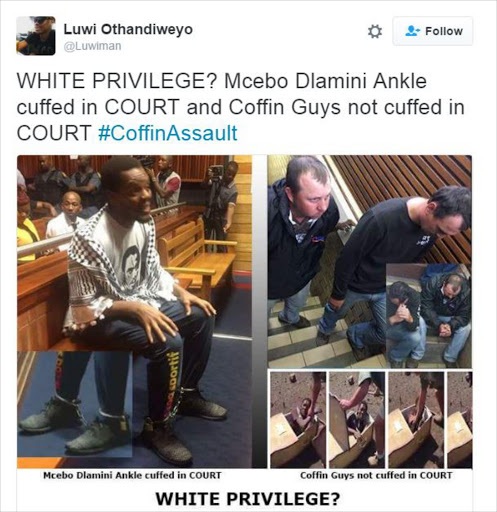 Do police apply double standards when they decide which prisoners should receive ankle shackles when they appear in court?

Many people appear to believe so‚ judging by social media posts on Wednesday contrasting the restraints used on Fees Must Fall leader Mcebo Dlamini and the two #coffincase accused.

When Dlamini appeared before the high court sitting in the Palm Ridge Magistrate’s Court last week for his bail appeal‚ it was in iron leg shackles.

But when Willem Oosthuizen and Theo Martins Jackson appeared before the Middelburg Magistrate’s Court on Wednesday accused of assaulting Victor Mlotshwa and putting him in a coffin‚ their feet were not shackled.

Lehoho Michael Maila tweeted‚ “This indeed is a clear silent discrimination that if unchallenged will condemn the call for non racist society”.

However‚ police spokesman Brigadier Selvy Mohlala said it was standard procedure for accused people to be cuffed when appearing in court.

“Whether they get cuffed on the hands‚ legs or anywhere else depends on the police officer.

“A police officer who is accompanying the accused to court can determine how and at what point they get cuffed. We cannot commnet any further on internal police procedures‚” Mohlala said. — TMG Digital