Time for a Hani memo 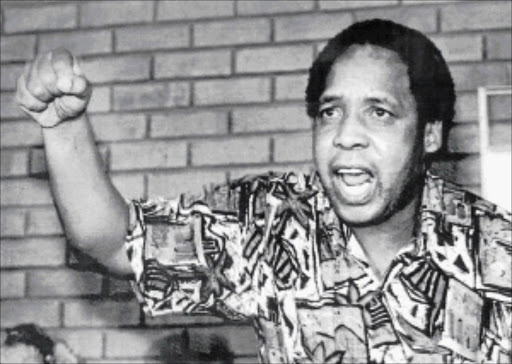 WIND BENEATH HIS WINGS: Chris Hani's widow Limpho was a loving wife to the late struggle hero and a pillar of strength to their children. PHOTO: LULAMILE FENBI

IN 1969 before the ANC's consultative conference in Morogoro, Tanzania, former SACP general secretary Chris Hani and six others penned a letter that shook the ANC top brass.

Later dubbed the "Hani Memorandum" the Umkhonto weSizwe soldiers in the camps decried the rot that had set into the ANC while executing its external mission in exile.

They outlined the "frightening depth of the rot in the ANC" which included careerism of its leadership abroad, shady businesses run by leaders with a questionable background and how the party's security had notoriously suppressed and persecuted MK cadres.

The seven were expelled by the party's national executive committee and were almost executed. They would later be reinstated.

The Hani memo comes to one's mind as we reflect on the ANC's worst performance in the local elections since the dawn of democracy in 1994.

Surely there is something terribly wrong with the leadership of the ANC.

Corruption, arrogance, lack of accountability and the disconnection with citizens were some of the issues that were raised by those who chose to punish the party by either voting for opposition parties or not casting their vote at all.

With the party now in dire straits, this begs the question: Are there still men and women in the liberation movement with the courage and conviction of Hani?

As the ANC edges closer to its elective conference in December 2017, who will author the Hani memorandum about the rot that has set in the organisation and threatens to collapse the 104-year-old party?

The recent local elections were, as expected, watershed.

Not only did the ANC record its biggest electoral losses, but the polls reasserted that, indeed, the people of this country do hold power. The people have spoken!

Those who were elected to be councillors will do well to remember that the axe will fall on them should they not serve the people but their narrow interests.

Should they not be accessible, serve with humility, revolutionary morality, selflessness and accountability, the people will do to them what they did to the apartheid government.

There is no longer time for arrogance and "dabbing". The poor masses of this country want a better life for all promised by democracy. And they want it now.

The most important lesson the ANC should take from the local polls is that ours is a constitutional democracy.

The forebears of our democratic order designed it with the wisdom to ensure that there are institutions that provide checks and balances and that no individual or organisation can be above the rule of law and the constitution.

The ANC's defence of a president who violated the constitution in the Nkandla matter represented, perhaps, the saddest chapter in the country's democratic dispensation.

This was the dizziest height of flagrant disregard for the constitution, our social contract which represents the dreams and the aspirations of our nation.

But the people of this country reminded the governing party that ours is a constitutional democracy, not just an electoral democracy.

This means that, inasmuch as you can get the majority of votes, there are still institutions that keep your power in check to avoid its abuse while arrogantly bragging "our people gave us the majority vote".

In his book The Origins ofPolitical Order, political scientist Francis Fukuyama asserts that a successful modern liberal democracy combines three sets of institutions to achieve stable balance: the state, the rule of law and an accountable government.

If these are weak or absent, "the natural human propensity to favour family and friends constantly reasserts itself" and "organised groups - most often the rich and the powerful - entrench themselves over time and begin demanding privileges from the state".

"A free market, a vigorous civil society, the spontaneous wisdom of the crowds are all important components of a working democracy, but none can replace the functions of a strong, hierarchical government," he wrote.

Are we at the point that our institutions are weak? Not really, but there are signs that we might be headed there should we drop our guard.

What is clear is that the ANC's loss of metros - the country's economic cash cows with real tax bases, will weaken the party's ability to fulfil its promises.

With the economy still in white hands, the state is the only weapon available to the ANC to carry out its mission.

At the rate things are going, soon the ANC, which is now a rural party having lost control of economic centres, will be a celebrated organisation of Bantustan leaders.

This is while the DA consolidates control of urban centres, which were essentially formerly white in SA.

As the ANC elective conference approaches, who will write the "Hani memo" and risk being politically "executed" to save the dying party?