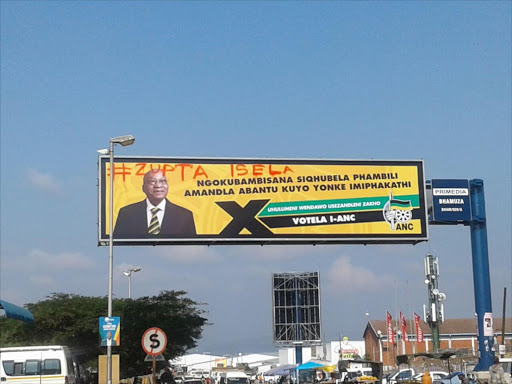 #Zupta isela (Zupta is a thief) has been spray-painted in red above an image of President Jacob Zuma on an ANC election billboard overlooking Ulundi’s busiest street.

The ruling party in KwaZulu-Natal has fingered the Economic Freedom Fighters (EFF) as the culprits.

But the opposition party‚ which came up with the phrase Zupta‚ to illustrate the Gupta’s influence on Zuma‚ has denied defacing the billboard in the northern KwaZulu-Natal town.

African National Congress KZN spokesman Mhlaba Memela said on Thursday that although the region’s leadership had just begun probing the vandalism and have yet to open a case with the police‚ it suspected that the EFF was behind the crime.

“This is not the first time that this has happened. Last month in the Richards Bay area‚ our posters on street poles were destroyed and defaced by EFF members. They pasted their posters over the ANC posters. That case is still with the police and the evidence is out there that it was the EFF.”

“This time‚ it’s obvious that it was the EFF that defaced the billboard. It’s not just the colour of the paint but the language that was used. Zupta and thief are part of the language they use to show their hatred for the president‚” he said.

He said the offending graffiti had not yet been removed.

“We haven’t taken down the billboard. We are waiting for leadership to advise what we should do‚” Memela said.

EFF KwaZulu-Natal spokesman Jackie Shandu said it was “shocking” that the EFF had been blamed without any “shadow of evidence“.

“All South Africans who are opposed to a president that has been proved to be a thief and to be in pockets of businesspeople think of him like that. Zupta is not only our language. This is how all South Africans of conscience and principle across racial and class lines speak because everyone is against the conduct of the president.”