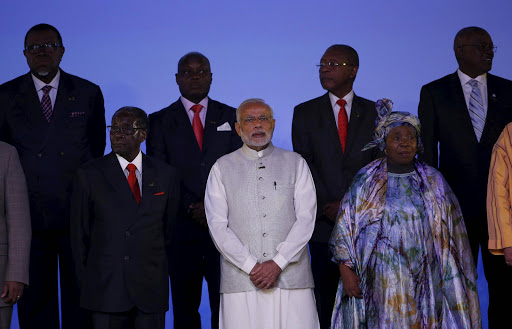 New Delhi - Indian Premier Narendra Modi on Thursday announced $600m and a line of cut-price credit in development aid for Africa as he called for expanded trade, all part of an effort to limit China's influence on the continent.

Fifty-four countries were represented - with attendance by 41 African heads of state and government - at the 3rd India-Africa Forum summit in New Delhi, India's biggest-ever diplomatic outreach to the resource-rich continent.

"India is honoured to be a development partner for Africa," Modi said. "It is a partnership beyond strategic concerns and economic benefits."

The development grants were to include 50 000 scholarships for Africans to study in India. India will also offer $10bn in concessional credit during the next five years, in addition to an ongoing credit programme of $7.4bn. Concessional credit consists of loans provided at interest lower than market rates. They are one of India 's main development aid instruments.

Both sides also decided to boost commercial and energy ties. Trade between India and Africa has already doubled to nearly $72bn over the last five years.

"We will give high priority to increase trade and investment flows between India and Africa. We will make trade more balanced. We will facilitate Africa's access to the Indian market," Modi said.

India's push for aid and commercial ties is seen as an attempt to catch up with the massive Chinese influence in Africa.

Currently, India's economic engagement pales in comparison to China, which has trade with Africa accounting for more than $200bn. Beijing extended credit lines worth $30bn to Africa last year.

But India is looked at as a viable alternative to China for African countries as the Chinese economy sees a slowdown, foreign policy analyst Richa Sekhani said.

Participants at the summit also decided to push for permanent seats on the United Nations Security Council, currently comprised of China, France, Russia, Britain and the United States.

"We have remained underdogs at the UN," Zimbabwean President Robert Mugabe, who addressed the summit as chair of the African Union, said. "Together, Africa and India constitute one-third of the world's population. Surely, their rights must be respected."

The two sides also discussed closer defence and security ties, including enhancing counter-terrorism co-operation against the backdrop of a growing arc of terrorism from Nigeria to Somalia.

The four-day long summit in Delhi was considered the largest gathering of African leaders abroad. It was much larger than its 2008 and 2011 editions, which featured 15 African countries.

All major African leaders - including South Africa's President Jacob Zuma and Egyptian President Abdel Fatah al-Sissi - attended the meeting. But there was some controversy over the presence of Sudan's Omar al-Bashir, who is wanted by the International Criminal Court.

Heavy security was deployed in the Indian capital, including at Indira Gandhi Stadium, which was converted into a makeshift convention centre for the summit.