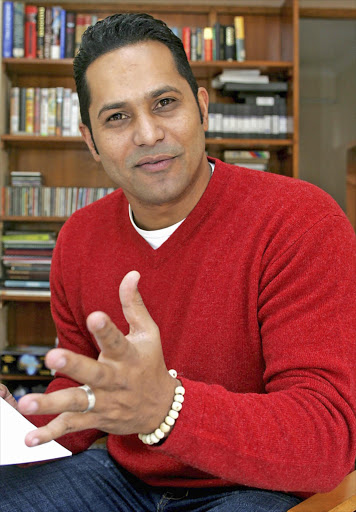 The SABC Newsroom anchor has been put off air following the ‘unprofessional’ manner in which he handled an interview with EFF national spokesperson Mbuyiseni Ndlozi.

Jansen was seen denying the interviewee an opportunity to respond to his questions relating to EFFs involvement in defacing of ‘apartheid and colonial’ statues.

The two eventually began talking over each other and engaged in a heated debate.

The interview took a different turn when Ndlozi angered Jansen by telling him that a question he (Jansen) had posed was ‘intellectually bankrupt’.

“Throughout history, humanity, wherever colonisers have gone. Whether it’s South America with the Mayans, whether it’s North America with the Red Indians there, Australia with the aborigines. Those in power have always tried to diminish history. What makes your protest different from trying to wipe the history of a group off the face of the kaleidoscope of South African history?” asked Jansen.

Yep, he said the words ‘red Indians’. To which Ndlozi replied:

“If you gave me a chance, don’t jump the beat because I’m trying to demonstrate the intellectual bankruptcy of your question”.

The official word from the SABC is that Jansen’s behaviour was unacceptable.

“Obviously we found what he did was unbecoming and unacceptable. That is why immediately he was put off air. We felt what he did was not correct and is something that we cannot condone.

“His role is supposed to be to facilitate the discussion, not to be part of it,” explained SABC spokesperson Kaizer Kganyago.

He said that Jansen is one of the national broadcaster’s best anchors and that he has not been fired but put off air for a certain period as a punishment for his behaviour. He has provisionally been replaced by Sam Marshall.

“We have not fired him, we have put him off air as a punishment. He is a freelancer, so he is not going to be scheduled for a while because of the thing that he did. When we say a freelancer is put off air it affects his pocket."

“It’s a punishment because he gets paid by appearing. They appear and they sign because of having worked for so many hours. It’s punishment in itself because he can’t claim for the time he was not on air,” he said.

Jansen was axed from eTV in 2002 after making claims that the Manchester United coach Sir Alex Ferguson had ‘groped’ a Cape Town woman.