Culture of looting part of our society 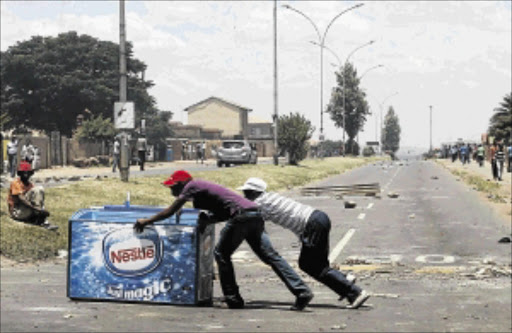 DAYLIGHT THEFT: Locals push a freezer after looting it from a shop, believed to be owned by a foreign national, during service delivery protests in Mohlakeng, west of Johannesburg, recently. The writer says although looting seems to be common during service delivery protests, she questions the contention that South Africans are by nature xenophobic photo: Siphiwe Sibeko/reuters

THERE is a rush to label South Africans xenophobic whenever foreigners are affected by violence.

Since the recent looting in Soweto, newspaper, TV and radio headlines have been saturated with xenophobic subject matter. The question is, was the recent act by Sowetans strictly xenophobic or an act influenced by economic desperation and a general culture of looting?

We need to face it, South Africans have developed a culture of looting and destruction during protests.

An example is the South African Transport and Allied Workers Union march in Cape Town in 2006 that resulted in damage to property estimated at R1,5 million.

Shops and stalls were vandalised and looted, vehicles damaged and several people were injured. In this instance the City of Cape Town even took the matter to court. Most downtown shops have become accustomed to closing their shops on the day of a major march as looting is always expected.

Should we be surprised when this same culture of looting, violence and destruction is now enforced in various townships?

Should we not as a country start addressing this culture of looting and destruction that seems to have become the norm in our society rather than labelling South Africans as xenophobic?

There is no denying that South Africa has had some of its xenophobic tendencies displayed on the international stage. Particularly, a series of riots in May 2008 that left 62 people dead, thought to be mostly foreigners but 21 of those killed were South African citizens.

If the recent events in Soweto are strictly xenophobic then maybe we need to use a magnifying glass and take a closer look at the practice of other countries. According to the Oxford Dictionary, xenophobia is defined as "an unreasonable fear of foreigners or strangers or of that which is foreign and strange".

Let's take the case of Egypt. According to CNN's Freedom Project Special Death in the Desert aired on November 5 2011, there is an Egyptian policy of shooting unarmed migrants complete with some small mass graves where their bodies are thrown never to be found. The SA media missed this coverage even though it was aired internationally.

According to the New Generation Foundation for Human Rights that tries to help African refugees in Egypt, many migrants remain imprisoned in camps on the Sinai Peninsula.

The organisation also notes that ". some of them [migrants] are taken to Libya, but 80% of them are smuggled to Israel.

"Those who escape are shot by the Bedouins and others who make it to the border are sometimes shot by the Egyptian authorities and transferred to hospitals before spending a year in different prisons in Sinai and deported back home."

According to another, African refugees and migrants are frequently the victims of unprovoked arrests and disappearances, while also struggling to feed themselves and pay rent.

Although Egypt is considered part of the Arab community, it is still located on the African continent and is an active African Union (AU) member so one would assume that it is not exempt from applying some level of "Africanness".

The point of this example is to question the criteria used to label South Africa as xenophobic.

In March 2012, the DA leader Helen Zille stated that South Africans are a profoundly xenophobic group of people. Exactly what did Zille mean by this statement? Was her statement inclusive of whites? Or was her reference directed only towards African people?

A lot of debate around the Soweto looting revolved around why black South Africans hate Africans from other countries. This begs the question, whether xenophobia was now being tagged as a black-on black-issue?

It should be noted that I am in no way justifying the recent criminal acts that took place in Soweto against foreign shop owners. Those acts wereinhumane, and should not be repeated.

As Minister Lindiwe Zulu stated, the Soweto community needs to devise a way to accommodate all legal foreign business owners because they need to make a living. My concern is the tendency to quickly label black South Africans as extremely xenophobic.

The danger in remarks made by public figures such as Zille is that they feed into the stereotype that South Africans are incapable of being rational about anything foreign.

Xenophobia is a worldwide phenomenon found in well-grounded democratic nations regionally and internationally.

Given that Africans make up the highest number of poor immigrants seeking better pastures, the issue should be how African leaders can better facilitate economic growth and industrial development in order to address the reasons for people emigrating.

lApril is a research specialist in the governance and security programme of the Africa Institute of South Africa division of the Human Sciences Research Council.