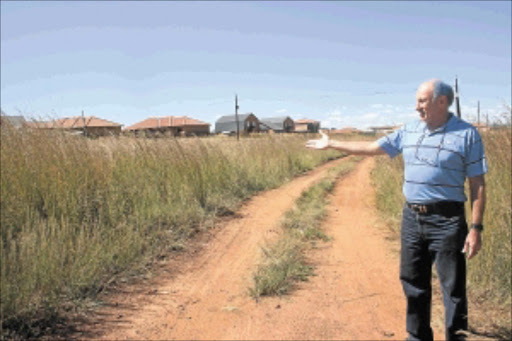 Mpumalanga has been rocked by another serious scandal.

Documents shown to Sowetan have revealed that the Steve Tshwete municipality in Middelburg has sold a piece of land to a company and on the same day the company sold the very same piece of land to a potential developer making a R1,6-million profit.

Documents obtained from the deeds office show that the municipality sold nine stands in Aerorand to Dun-Dur Housing for R705,204.

No further development took place on these stands and the undeveloped land was sold by Dun-Dur Housing to another company, Camm Development Trust, for R2,3-million - making a profit of R1,594,796.

Mpumalanga has been hit by similar scandals in the past.

The office of Public Protector Thuli Madonsela is currently investigating a deal that saw a businessman pocketing R24.5-million in a record two minutes.

The 414 hectare Rietfontein farm in Ermelo was originally bought from Fremax Farms for R11.9-million by a company called Bongiveli.

It was transferred to Bongiveli in just under three minutes. Bongiveli resold it to the Mpumalanga department of human settlements for R36.4-million in two minutes.

All three transactions were concluded within six minutes in the afternoon of May 16 2011.

Even in the latest case, the registration of the property from the municipality to Dun-Dur Housing, and from Dun-Dur Housing to Camm Development trust, took place on the same day.

Dun-Dur Housing was deregistered as a company within one month after this transaction took place.

But Steve Tshwete municipal manger Willie Fouché insists that there was nothing dubious about the deal.

"That piece of land was first sold by the municipality in 1994 and the transfer only took place in 2009," said Fouché.

"We were not aware that the transfer from Dun-Dur to the trust had taken place on the same day. Except for the fact that we were misled with the granting of permission for the re-sale, there is nothing wrong with this transaction.

"Why did the municipality sell the land for R705,000 if its market value is significantly more?" asked DA councillor Hennie Niemand.

"It would make no sense for the Camm Development Trust to pay R2,3-million for land valued significantly less," he said.

In 2010 premier David Mabuza's former business partner Patrick Chirwa was exposed by the Sunday Times after he used his company, Pacific Breeze Trading 474, to buy cheap land and sell it at an exorbitant profit to municipalities seeking land for housing and social services.

Company records and title deeds to land show that between 2007 and 2008, Pacific Breeze bought four smallholdings for R7,6-million and then sold the same land to the government for R44,4-million.

This not only angered the people of Middelburg but opposition parties as well.