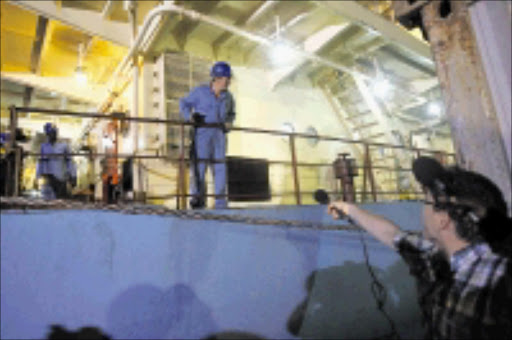 SEA DRAMA: A member of the media attempts to interview the crew aboard the Maersk Alabama after it docked in Mombasa, Kenya. The US ship was attacked by Somali pirates last week.11/04/09. PIc. Karel Prinsloo. © AP.

MOGADISHU - A Somali pirate chief yesterday threatened to target Americans in revenge for the rescue of a US captain in a dramatic operation that saw military snipers kill his captors after a five-day standoff.

After the rescue on Sunday evening, the head of the pirate group that had held the American hostage aboard a lifeboat claimed they had agreed to free him - without ransom - before the US navy took action.

"The American liars have killed our friends after they agreed to free the hostage without ransom, but I tell you that this matter will lead to retaliation and we will hunt down particularly American citizens travelling our waters," Abdi Garad said by phone from the pirate lair of Eyl.

"We will intensify our attacks, even reaching very far away from Somalia waters, and next time we get US citizens ... they [should] expect no mercy from us."

Captain Richard Phillips, who commanded the Maersk Alabama cargo ship, was rescued when snipers took aim at the pirates on Sunday evening and after President Barack Obama approved the use of force to save him.

He was in good health after being held hostage for five days in the lifeboat from the Maersk Alabama after the ship's US crew on Wednesday fought off the pirates' attempt to capture the freighter.

Navy snipers hidden in the rear of the USS Bainbridge, one of two navy warships that rushed to the scene, killed the pirates, said commander of US naval forces in the region Vice Admiral Bill Gortney.

The pirates "were pointing the AK-47s at the captain," who was tied up, Gortney said. Obama had given orders to "take decisive action" if Phillips was at risk.

The snipers fired when they had one of the pirates in their sights "and two pirates with their head and shoulders exposed," Gortney said.

At the time the USS Bainbridge, was towing the lifeboat to calmer waters and was some 25 to 30m ahead of the boat.

According to CNN, the snipers were earlier brought in by helicopter and dropped into the water behind the Bainbridge.

The fourth pirate had surrendered, Gortney said, adding that the US Department of Justice was "working out the details" on how and where to prosecute him.

US media described the surviving pirate as possibly being 16 years old.

Obama - who had been publicly silent on the hostage crisis - said he was "very pleased" with Phillips' rescue, calling it "a welcome relief to his family and his crew".

The US was resolved to combat piracy off Somalia, Obama said. - Sapa-AFP