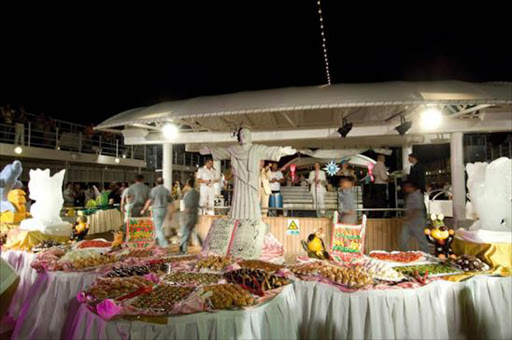 This came after the Boikanyo Burial Society members accused its entertainment manager, Rebecca Mnisi, of using their money to book her relatives instead on the cruise

A HOLIDAY of a life-time threatened to turn into a nightmare when the chief executive of the world's leading cruise company threatened to stop passengers, who were scheduled to undertake a cruise, from boarding their ship for their December trip due to a payment debacle.

This came after the Boikanyo Burial Society members accused its entertainment manager, Rebecca Mnisi, of using their money to book her relatives instead on the cruise.

The Boikanyo members say Mnisi had used their money to pay for a trip they had not agreed to.

The cruise was destined for the Portuguese Island, and Mnisi told them if they cancelled they would forfeit the R30,000 they had paid for the trip.

Beatrice Maluleke and Dorcas Manzini who spoke on behalf of the society, said when they demanded a copy of the cruise contract with all the terms and conditions - including stipulation of a cooling off period and a forfeiture clause - Mnisi could not produce it.

"Mnisi then recruited her relative, whom she registered for a free ride at our expense," said Maluleke.

Explaining the circumstances surrounding the controversy, she said Mnisi had enticed them into going on a sea cruise for the December holidays, which they were all excited about.

Maluleke said Mnisi arranged with Petro Janse van Rensburg, an agent representing MSC Starlight Cruises, to make a presentation to Boikanyo on the services they offer. After the presentation they agreed to discuss the trip with the members before any payment was made.

"But before we knew it, Mnisi had pressurised the treasurer and secretary into releasing the funds," said Manzini. She said the demand to release funds came at the time when the burial society's executive was going to schedule a meeting to review Boikanyo's constitution.

They had made a one-day reservation at Nice By Nature in Fourways and were charged R25000, said Manzini. She said the treasure and secretary then released the society's bank book into their care thinking they would only withdraw money to be paid to the chosen venue.

"Instead, she (Mnisi) withdrew R55,000 and paid R30,000 to Janse van Rensburg who had already made a reservation before consulting us," said Maluleke.

The society members then demanded the recovery of the funds , but Mnisi was unable to comply because MSC 's cooling-off period had already lapsed.

Mnisi confirmed Manzini and Maluleke's allegations but averred that they had given her the go-ahead to make a booking.

Mnisi said she had to recruit interested people who would replace Boikanyo members for the trip and in that way save their money as she had already been told she would forfeit the R30000 deposit.

She said she managed to recruit 16 people who have since paid her R16,000 which she intends giving back to the society.

Mnisi claims she is a victim of circumstances, adding she regretted telling the members about the cruise. She said she had lost thousands of rands trying to replace the members who had chickened out on her.

Daphne Osborne, CEO of MSC, confirmed that they had received funds from Janse Van Rensburg, who made a booking for the cruise for interested parties, but later received a cancellation notice.

"We have also laid our hands on our invoice which has been tampered with, the bank details of Janse Van Rensburg have been inserted into our confirmation and we are taking this up with her directly," said Osborne.

The receipt was given to Boikanyo members as proof of booking which shows a payment of R34,000.

Osborne said they had only received R25,800 from Janse Van Rensburg out of the full cruise amount of R85,800.

She said they refunded R12,900 to Mnisi for the cancelled cabins and credited the difference to reservations. Osborne said Mnisi said she would meet the members on December 11 and give them the money.

"If their money has been used in the bookings we hold, all we can suggest is not to allow these passengers to travel on the cruise," said Osborne. She said no money has been forfeited to MSC as they had refunded Mnisi all the moneys paid for the people who cancelled.

After Sowetan's intervention, Mnisi deposited a bank guaranteed cheque of R30,000 into the society's bank account and prevented a nightmare which almost befell her relatives and friends.