Zakes back and ready to take music to global stage 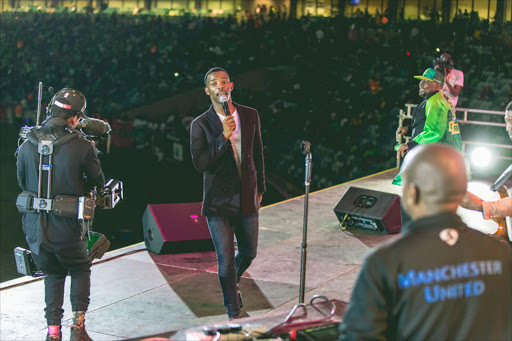 Zakes Bantwini entertains the crowd before the game

After his prevail as a high-powered executive at Sony Music, Zakes Bantwini returns to making music with a new vision and vitality.

He is all about a universal, if not a continental, takeover. He has a lot going for him considering the expansive knowledge of the industry he has, the contacts he has made and his music - which is just jolly good.

As we sink into the sofas in the Freddie Mercury meeting room at our new Tiso Blackstar Group offices in Parktown, Johannesburg, Bantwini has renewed vigour as we unpack his newest album, Love, Light & Music 2.

"I realised that I did what I wanted to do at Sony. For three years I sacrificed my career while I occupied the position of head of A&R," he tells me.

He left at the height of his career to establish the company on the African continent and, most importantly, to take South African music beyond our borders.

"Before I joined Sony, I felt that record companies were failing us or were not taking us seriously. We had to put in systems that would benefit us. If they could sample Chris Brown and Rihanna in their African offices, why couldn't they do the same for Zakes and others?" he asked.

He's proud of his legacy. There is a Sony office in Nigeria where South African artists can go and be helped with media or even a radio tour and staging performances.

He's even happier that he parted with the company on a good note. "It's a small industry, you can't have enemies," he cautions.

He's exasperated by South African artists having a local view while dominated by American musicians and Nigerians.

"Why did it end with Lucky Dube? There's been nobody after him.

"We need to have a truly global superstar living in South Africa to go and collect those euros, dollars and yens and come and spend them here in our economy."

He's determined to complete his mission and take his music far. His album Love, Light & Music 2 is a delicious mix of influences and a clash of beats that will get the continent dancing.

"I feel that one needs to open other markets and go to every corner of Africa. I'd love to see people sing Bang Bang Bang or My No.1, and we're in the process of making that happen," he says.

The thing about Bantwini is that his music is almost like textbook material.

He is fully rounded, technical and serious even in his playfulness. He samples jazz standards and borrows from world and folk sounds at a time when quick beats in makeshift studios composed in minutes yield popular hits.

"I studied music. I have to use the information. As a musician you have to educate people about what makes good music, introduce them to new sounds. You don't have to always give people what they want to hear.

"People will know when the music is honest. If it wasn't so I wouldn't have a career in South Africa. I don't make music to be current, that's why I'm able to take long without releasing."

His hits Wasting My Time, Clap Your Hands and Ghetto have stood the test of time and sound as fresh as they did seven or so years ago. The last time he released new material was in 2013 but has remained relevant.

He now releases through Universal Music, and Light, Love & Music 2 has some refreshing jams such as the Afro-beat-leaning Dancing Trumpet featuring Hugh Masekela, who he says he always wanted to work with. My No.1 is a thoroughly entertaining reggae-infused and Latin-kissed love ditty dedicated to his singer wife Nandi, with whom he has a son, Shaka. Bang Bang Bang could come straight from the streets of Lagos, it's unmistakably Afro-beat and cut from Fela Kuti's template.

For fans of a commercial persuasion, Amantombazane will keep them on their feet.

He's leisurely elegant in the celebratory Rock With You.

With such a time-proof arsenal of hits, Bantwini is ready to shine on a global stage.