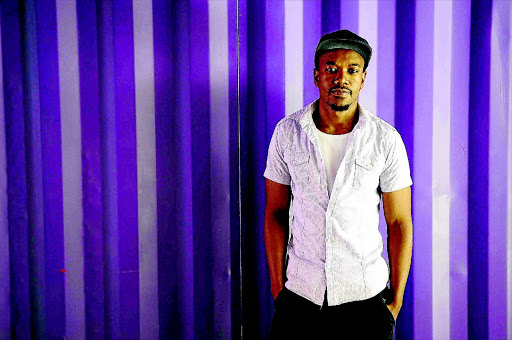 Man about town Moopi Mothibeli is taking it all in his stride. After zooming up the soapie food chain as Smanga in Generations: The Legacy, Mothibeli sits comfortably as one of the most recognisable faces on local television.

From being asked to look into the eyes of a total stranger when posing for a photo with an admiring female fan, to being given funny looks for playing Smanga, the feisty and aggressive executive at Ezweni advertising agency, Mothibeli's life is never dull.

We meet in artistic Melville, Joburg, and I'm immediately taken aback by the thick American accent the reluctant star carries.

We hop from one coffee shop to another looking for a quiet restaurant for us to sit down and chat.

Coming from a family of footballers, Mothibeli says football was all he thought of while growing up.

Born and bred in Sebokeng, he represented the region now known as Sedibeng at under-12 level and hoped to make it as a professional player.

When the football structures in Sedibeng crumbled, Mothibeli said it took a while for him to accept that the dream of becoming a professional player might not happen. It wasn't until he was handed a script in high school to play the lead in Romeo and Juliet that he took a liking to acting.

He entered the school's poetry club to further his interest in drama and has not looked back since.

After graduating with a BTech in drama from Tshwane University of Technology, Mothibeli got a scholarship to study for a masters in fine art at Ohio State University in the US.

For three years he was on stage performing for American audiences and he had to sharpen his accent. "In the beginning it was very difficult for me, because people couldn't hear me. I played, for the most part, American roles, so I had to sit down and work on my American accent. Funny enough, when I got back from the States, every time I opened my mouth people would ask me where I am from.

"In my third year in Ohio I taught first-year masters students who often referred to me as professor."

But his dream was quickly shattered when he couldn't raise enough funds for his tuition fees and had to come back home.

Mothibeli is laid-back and easy to talk to as he eloquently takes me through how he landed the role in Generations hardly a year after returning from the US.

"All things work together for the goodness of those who love the Lord," he says, summing up his big break on local television.

He puts his energy into Generations. "I realise I'm at a fragile and crucial stage in my career and I need to root myself in Generations and master my craft," he says.

The 31-year-old bachelor says he is not in a hurry to get into the dating scene but is waiting for the right person to come along.

He does not see himself as a celebrity. "I'm just a simple guy who still hangs around with the same friends and enjoys being indoors."

He gives credit to his parents, who supported him when everyone else discouraged him from taking up drama.