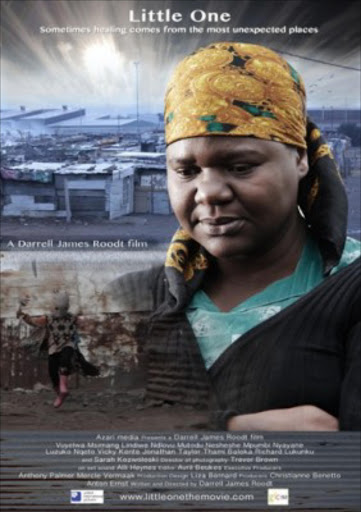 We chat to actress Lindiwe Ndlovu, the lead character in the South African produced film Little One.

A month before the opening, she bagged a SAFTA award presented by the sauve American actor Samuel L. Jackson for best actress in a feature film.

In the film Ndlovu plays the character of Pauline, a woman who finds a six year old child brutally raped, beaten and left for dead at an open veld nearby.

Her character wrestles with this brutality and of course we are taken through her journey of this tragedy.

During our interview we can’t help but speak about the nature of the film under the atmosphere of the shocking events we’ve witnessed in the past months; the murders of Anene Booysens, supermodel Reeva Skeenkamp and of course the many others which go unreported everyday.

She takes a long pause as if taking this thought in. “Our country needs healing,” she says.

The 37 year old who doesn’t look a day older than 25 with her supple, smooth ebony skin and a coy smile, brilliantly shows off her acting skills through this tough role which she takes on with humility.

She’s been in the industry for 14 years, having started her career on the stages of the Market Theatre in 1999 where she perfected her acting in “forum theatre”.

This theatre requires active audience participation for the purpose of demonstrating and propelling dialogue amongst community members about moral issues, particularly on the side of the oppressed. And about this she hails it as the best training ground. “You do everything there [and] its also about getting people to talk.“ But Lindiwe is also sober minded about the hardships of the industry.

For one, breaking into it was quite a tough journey but with the help of her aunt who was instrumental in getting her at her first audition, (although this turned out to be a fly by night institution in Orange grove) received her first breakthrough.

But she persisted. “One Sunday I had come back from church and she [my aunt] had cut out from the newspaper, that said auditions for a drama school: Market Theatre Laboratory and so I called them. They asked me to prepare two contrasting monologues, a song and a dance piece..and that’s how the madness began...” she says.

She added, had it not been the validation from her family and friends she might not have seen the acting through.

“With the kind of support I have, that’s how I’ve managed to do it...

"I’ve had to teach my family everyday [about the workings of the industry] because they’re the ones to understand why there isn’t any money [during dry seasons].”

She laughs but turns thoughtful again, like she’s sure acting is a definite vocation.