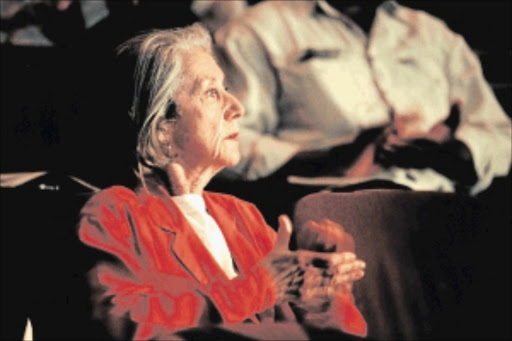 CELEBRATED South African author Nadine Gordimer will be honoured by fellow writers on her 88th birthday in Johannesburg this weekend.

Gordimer, whose writing earned her the Nobel Prize for Literature in 1991, celebrates her birthday on Sunday.

To honour her the Department of Arts and Culture has dedicated the 2nd African Women Writers Symposium to Gordimer.

She is a founding member of the Congress of South African Writers.

The author, scriptwriter, Nobel winner and ANC member, was the first South African to win the prestigious award and the first woman to win it in 25 years. She donated a substantial part of her Nobel Prize money to Cosaw, to develop black writers in South Africa.

In 1974, her novel, The Conservationist, was a joint winner of the Booker Prize for fiction. Burger's Daughter (1979), written after the Soweto students uprising, was banned, along with her other books.

Although many of her books were banned by the apartheid regime , they were widely read around the world and served as a testament over the years of the changing responses to apartheid .

Gordimer's books and short stories have been published in 40 languages. She was made a Commandeur de l'Ordre des Arts et des Lettres (France) and is vice president of International PEN and a Fellow of the Royal Society of Literature.

In 2007, she was awarded the Chevalier de la Légion d'Honneur (France).

The African Women Writers Symposium takes place from tomorrow to Sunday at Sci-Bono Discovery Centre in Newtown, Johannesburg and at the Windybrow Theatre in Hillbrow.

It is organised by the government in partnership with Windybrow and Wits School of Languages and Literature. It is supported by M-Net.

"The event will provide a space for African writers to engage in a dialogue about African writing and its contribution to being African in the world, focusing especially on writing by women.

This gathering takes place at a time when major changes have taken place in the north of Africa. Women writers from Egypt, Libya and Algeria will share their thoughts with the SA audience, said Lisa Combrick, symposium convenor and head of communications at the Department of Arts and Culture.