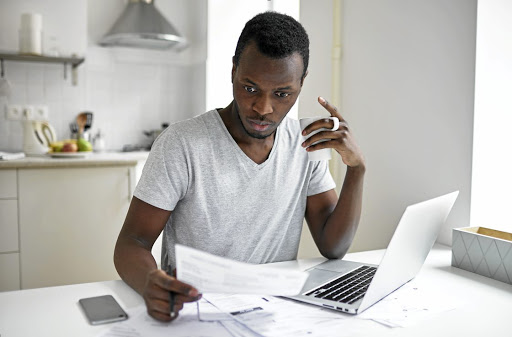 Be deeply suspicious of loan offers at unrealistically low interest rates. Banks and loan sharks are not philanthropic by nature. /123RF

When Sam* (not his real name) fell behind on his home loan instalments, he decided to take out a personal loan, but instead of solving his problems, he got deeper into financial trouble after falling for a scam.

"I went on to the Direct Axis website - I had taken a loan from them many years ago - and filled in a few basic details such as my name, ID number, cellphone number and gross monthly income. An automated response said I was not eligible for a loan, presumably because I was behind on my home loan payments."

A few minutes later, Sam received a promotional e-mail, apparently from Direct Axis, offering personal loans at an interest rate of just 5% a year, and welcoming applicants who are "blacklisted".

He responded expressing his annoyance at having just had his loan application rejected only to receive such an e-mail.

"I was quite surprised when I received a reply inviting me to apply for a loan, and asking for documents such as a scan of my ID and three months' worth of bank statements.

"I sent these off, and was told later the same day I had been approved for a loan of R20000, repayable over two years. This was on a Friday.

"On the Monday, when I inquired about the money, I was asked to pay R2999 in respect of legal fees to draw up the loan agreement. I duly paid this sum into a bank account."

The fraudsters then got greedy, and attempted to extract more money. They wanted R5500 to cover "insurance" for the two-year loan. It was at this point that Sam realised he had been scammed.

"I visited the Hellopeter website, where I read similar stories."

Sam said that with the wisdom of hindsight, "the signs of fraud were everywhere". For instance, the e-mail was hosted on Outlook, and the logos on the letterheads showed signs of copy-and-paste.

He said the offer to borrow money at such a low interest rate should have rung an alarm bell. So, too, should the reference to "blacklisted" applicants. Any credit provider lending to consumers with impaired credit records is engaging in reckless lending. And personal loans attract interest much higher than 5% a year.

Sam said that aside from the loss of R2999, he was humiliated, because he has warned his family about such scams for years.

"I was caught only because I was stressed and not paying attention.

"My advice to anyone else seeking a loan: do not respond directly to an e-mail. Rather visit the website of the institution. If in doubt, make a phone call. Above all, be deeply suspicious of offers of a loan at an unrealistically low interest rate. Banks and loan sharks are not philanthropic by nature."

Alet Griesel, the chief risk officer at Direct Axis, declined to say how many customers had been caught in such a scam this year. She said the company used its website, social and community media to warn clients about scams.

How to spot a bogus lender

• The scam invites you to apply for a loan and asks for a fee upfront. The description of the payment can sound quite official. For example, an administration or attorney fee.

• The hook the scammer uses is a low interest rate; one significantly lower than what’s in the market. This leads you to believe the loan won’t cost you much to repay, making it seem very attractive. The unfortunate outcome is that you never get to enjoy this low interest rate, because you’ll never receive the money once you’ve paid the upfront fee.

• Do not assume the e-mail is legitimate simply because it is branded with a company logo, or displays the company’s registration, address or contact details. Fraudsters frequently add these elements to e-mails to deceive you.

I am a 24-year-old digital marketing manager based in Johannesburg. I have been curious for a while about the time I have to retire. Friends have suggested I look into getting a retirement annuity plan, while others speak highly of investing  money  rather. What would you suggest I do?

Money  editor Laura du Preez replies: The huge advantage a retirement annuity has over a non-retirement fund investment is that there is a tax incentive for saving for retirement. If your highest tax rate is, for example, 25% it means that every R100 you earn in this tax bracket, you will receive only R75 to save in what is known as a discretionary investment. However, if you choose to invest in an RA, you will be able to save the full R100 as the R100 contribution can be deducted from your taxable income. Once your R100 is saved in a retirement fund, it will not attract dividends tax, income tax on any interest income or capital gains tax.

At retirement, you can take up to one third in cash and the first R500000 is tax free (as long as you have not used this tax break previously or used it for withdrawals pre-retirement).

The rest must be used to buy a pension on which you will pay tax but your tax rate will be lower in retirement than in the years preceding your retirement because your pension is likely to be lower than what you were earning while working and if you are over the age of 65 you will enjoy higher tax rebates.

How long does it take for an estate to be finalised?

Louis van Vuren, CEO of the Fiduciary Institute of Southern Africa, replies: The time required to administer a deceased estate depends largely on the size and structure of the deceased person’s assets and liabilities and on service levels the executor experiences from the office of the Master of the High Court, the South African Revenue Service, and various other entities such as financial institutions, the deceased’s employer and so on.

The executor has to navigate his/her way through steps that could influence the time and try to finalise the administration as soon as possible.

In the case of an estate smaller than R250000, the process is more informal and an executor is not appointed, but a person (usually a family member) is authorised by the Master to pay and collect debts and distribute the assets of the deceased.

In terms of the Administration of Estates Act, certain processes must be completed within certain time periods.

But in total, a deceased estate can take anything from five months (which is almost impossible), to several years to finalise.