Soweto‚ Sunningdale and Bloubergstrand are suburbs to watch 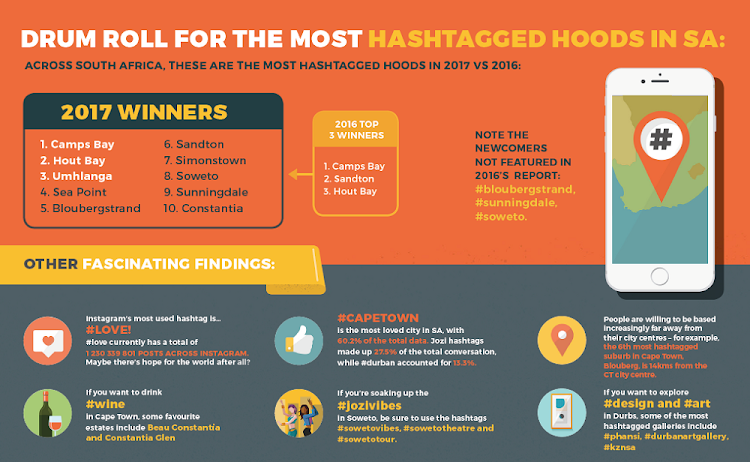 Tapping into the social conversation‚ PropertyFox partnered with research house Metric to sift through some 60‚000 hashtags‚ posts and comments from South African residents in 2017.

The new report revealed that people are moving further away from city centres to enjoy increased space at potentially more affordable rates.

Crispin Inglis‚ PropertyFox co-founder‚ said: “Cape Town is the most mentioned city once again‚ followed by Johannesburg and Durban. Camps Bay remained the most hashtagged hood in the country‚ with newcomers Hout Bay and Umhlanga coming in second and third‚ respectively. Sandton fell to number seven on the list from second place in 2016. Interestingly‚ Bloubergstrand‚ Soweto and Sunningdale all made the top ten list for the first time this year.”

Inglis believes that in the midst of the economic downturn‚ people are adopting a longer-term outlook on property investment. “Instead of buying a smaller place in a trendy suburb then moving in a few years when a bigger house is desired‚ people are looking to reduce transfer fees and the other costs of a sale by purchasing a larger home in a more affordable area from the get go.”

In second place is Protea Glen‚ a traditionally middle class suburb west of Soweto‚ with asking prices of around R600‚000 for a three bed property ...
Good Life
4 years ago

For example‚ Sunningdale saw the most hashtag growth of all the hoods‚ with a corresponding 3.8% increase in property investment.

Port Shepstone near Durban was the clear winner with 16.75% year-on-year property price growth.

Commenting on the next up-and-coming areas‚ Inglis said "there’s a definite trend for people to move outside the city centres‚ with some folks willing to commute more than 40km each day in exchange for a bigger home at a better price."

POPULAR PLACES TO HANG OUT

In terms of restaurants and bars‚ three of the most hashtagged restaurants across the country were Grand Africa Café & Beach in Cape Town‚ Marble in Joburg and Eyadini Lounge in Durban. Many Mother City hashtags were foodie oriented‚ with #wine‚ #foodie and #winetasting being the top tags in this space.

Influencers were found to play a crucial role in driving the popularity of places to eat and socialise. Inglis commented: “Social media is a currency of credibility. When an influencer raves about a restaurant‚ it’s not long before everyone’s eating there – for example‚ Tshepang Mollison (aka @twiggymoli) is known for posting gorgeous foodie snaps from around SA‚ which no doubt catalyses more business for these institutions. The same goes for areas and property trends.”

Food is something Twiggy remembers from her childhood in Soweto – Joburg’s second most hashtagged hood - where she continues to live today. She said: “I live in Soweto because my family has always lived there. In living here‚ I have been exposed to the vibrant people of Orlando West and the traditional delicacies that can’t be found anywhere else in South Africa. There’s a certain confidence that is instilled in us just by being from there and that’s something that I will embrace forever.”