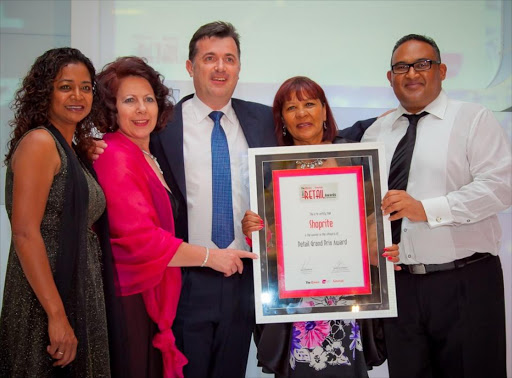 The ceremony, which took place last night at Shine Studios in Braamfontein, Johannesburg, was a showcase of not only South Africa’s retail top brass but also a who’s who of TV and radio personalities, musicians and actors.

Echoing the ceremony’s theme – Retailers on Display – Shine Studios was transformed into a virtual retail experience, which included live mannequins, bold splashes of colour, shop front window displays and even custom-made merchandise designed for the event.

Overseeing the ceremony, Enver Groenewald, general manager of Advertising Revenue and Strategic Communications at Avusa Media, presented awards to big-name brands in categories representing the length and breadth of South African retail outlets, including those in Household Appliances, Supermarkets and Hypermarkets, Furniture, Telecoms, Jewellery, Wholesalers and Sit-Down Family Restaurants, to name only a few of the 20 categories awarded on the evening.

The annual survey, commissioned by Avusa Media and conducted by TNS Research Surveys, showcases results compiled from around 4000 responses by local respondents and reveals which brands score the highest in the categories:

The coveted Grand Prix Award for Top Retailer in South Africa was awarded to Shoprite, the 2010 winner of the same award and a brand that has consistently landed itself within the top three in this category: a testament to the brand’s innovative brand campaigns.

Shoprite scooped one more award for Supermarket and Hypermarket of the year after rating very high with regards to overall customer experience. Simply put, the brand with the slogan lower prices you can trust, always remains ever-conscious of the economic strains faced by South African consumers and is passionate about delivering quality fast moving consumer goods as well as customer experience and remaining loyal to its customers, and it shows.

Game took home the top Household Appliances award, Makro was once again rewarded with the Wholesalers of the Year award; and Woolworths took the top Home Accessories and Décor award; scoring very high in terms of non-user brand perception and was cited by respondents as a highly aspirational brand. In the same category, Boardmans took second place, followed by a tie third place win for Edgars and Mr Price Home.

One of the most hotly contested categories, the Telecoms Stores award went to MTN Store, thereafter Nokia Care and Vodashop.

Holding on to its first place position, which it had held for three consecutive years, Clicks was followed by Dischem in second and Red Square in third place in the Health and Beauty category.

No retail awards ceremony would be complete without honours being bestowed on the top names that ensure South Africans are never far behind the latest local and international fashion trends: Woolworths repeated its 2009 win, taking an award for top Women’s Clothing, with Edgars and Truworths taking second and third place respectively. The Men’s Store award went to Edgars, followed by Woolworths in second and Truworths in third place.

In the Shoes category, Spitz was awarded first prize, and Totalsports took podium position in the Sport Apparel and Equipment category.

Adding to their awards, Woolworths also took top honours for Children’s and Baby’s Clothing as well as placing third in the Retail Grand Prix award category.

“Retailers are not only the backbone of our consumer-driven society but are also the source of countless jobs in our economy,” says Natalie Stephan, Head of Trade Marketing and CRM, Avusa Media. “Such as ceremony as the 2011 The Times Sowetan Retail Awards offers Avusa Media with the perfect opportunity to honour the brands that are a part of all our lives in one way or another. It’s most importantly an evening of celebration: for winners and nominees alike.”