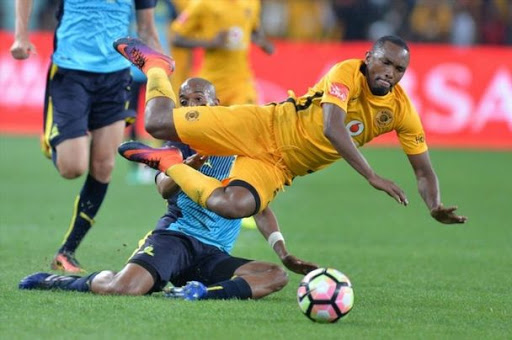 A goal on debut from Siyabonga Ngezana and a long overdue one from Bernard Parker propelled Kaizer Chiefs to a 2-1 victory over Mamelodi Sundowns last night.

The confidence-boosting win has set Amakhosi up nicely for the Soweto derby against Orlando Pirates on Saturday. Steve Komphela's men opened the scoring through Ngezana in the 50th minute and Parker doubled the scoreline in the 70th minute.

Sundowns pulled a goal back through a Themba Zwane penalty in the 81st minute after a foul from Erick Mathoho.

With fans having come in their droves, kick-off was delayed by 20 minutes. The packed stands got their money's worth as the teams put on an entertaining show. Not much went right for Sundowns after Tiyani Mabunda was red-carded in the second half and a late injury to Cuthbert Malajila saw Sundowns end the clash with nine men.

Chiefs coach Komphela has been under immense pressure to get the team going after a stuttering start which saw them even lose to unfancied Baroka. The fire Komphela was under could easily have blown up into an inferno if it was another negative result.

Sundowns on the other hand have refocused their energies on their domestic obligations after their bitter elimination from the CAF Champions League.

All eyes were on whether George Lebese would play against his former side but coach Pitso Mosimane had other plans as he dropped both Lebese and Oupa Manyisa from the starting line-up.

Mabunda made a disastrous return to central midfield for Sundowns after a lengthy spell on the sidelines with injury. He was sent off in the 73rd minute.