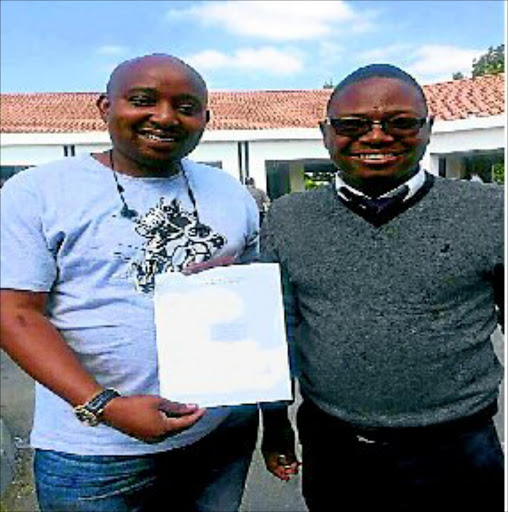 Leonard Modise and lawyer Emmanuel Lekgau who says the Modises are united behind his client Tshepiso as the new church leader.

The International Pentecostal Holiness Church (IPHC) has allegedly split into two following unholy internal fights over the leadership of the church.

So intense is the fight that church branches across the country are shutting down as members are forced to take sides in the leadership squabble of the popular church.

On top of the ongoing legal battle, members have pitted Tshepiso Modise against his younger brother Leonard by opening a new church in his name in Lenasia, south of Joburg.

The IPHC, one of Africa's biggest churches with more than 3million members, was founded and led by the Modise family since 1962 but was rocked by infighting since the death of its leader Glayton Modise in February last year.

Now, pending a high court battle over the control of the church by two warring factions, a new church has sprung up, established by a group purported to be close to Glayton's second-born son, Leonard.

Sekgonyane confirmed that he and other members have been worshiping at a hall in Lenasia and were being led by Leonard.

He said the church has more than 5 000 members and most of them come from various branches across the country.

"That's where we enjoy the music that Tshepiso does not want other members of IPHC to listen to with our comforter Leonard," he said.

Though Sekgonyane does not want to concede his church is a splinter of the IPHC, he accused Tshepiso of also opening his own new church in Springs, Ekurhuleni.

The former IPHC music producer said Tshepiso's new church is called International Pentecostal Church (IPC) and claimed that the church has its own emblem and uniform.

"It's owned by him and does not belong to the broader IPHC church. Tshepiso has never visited other branches except for Springs but yet he claims he is the leader of IPHC. That leaves me with a question: why claim to be a leader while you only lead from one branch?"

Leonard said: "I don't know anything about the church, let alone the person who opened it. And furthermore, I have no comment."

Lekgau said Sekgonyane and his group, including those who have "hijacked" the church headquarters in Zuurbekom, just 6km from Lenasia, are threatened by the Modise family unity.

"Church members have begun to raise their voices and are saying they won't be part of anything that does not include the Modise family. So, they are going around using Leonard's name to portray the family as divided," said Lekgau.

He said Leonard has deposed an affidavit at the high court supporting his brother Tshepiso in his leadership battle.

"He has also been recorded in a number of videos making it clear that he supports his brother," Lekgau said.

Sunday World has seen two videos in which Leonard states that his older brother is the legitimate leader of the church.

Lekgau said it was no secret that the church was facing a leadership battle but the court judgment will provide the truth to members.

He confirmed that two branches were closed in Limpopo. "The members said they want to be led by the Modise family and not hooligans. That's why the churches are no longer active," he said.

Lekgau confirmed Tshepiso was worshiping at a branch in Springs but denied that it was his own new church.

"The Modise family including Tshepiso have been attending services at IPHC branch in Springs because the members and community have assured them of safety and protection.

The members have made it clear that anyone who is against the Modise family is not welcome.

"They left Silo [Zuurbekom HQ] after they were forced out by the group that occupies the headquarters. We must make it clear that Tshepiso has visited other branches of IPHC."