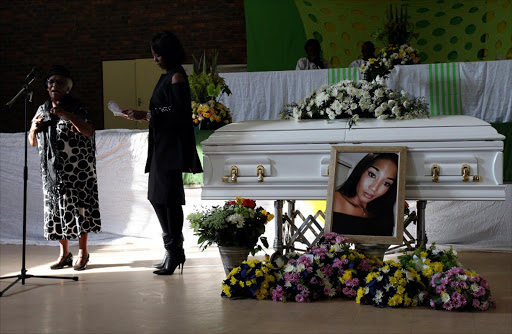 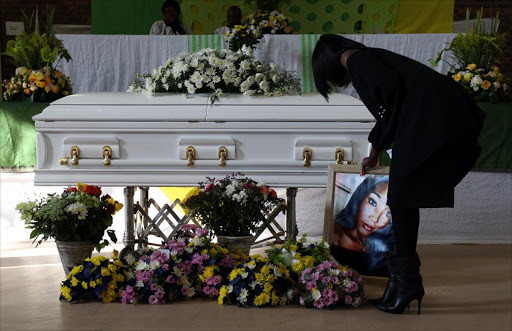 Gauteng model Lebogang Domenic Mathuloe might have been high on drugs when she stabbed herself to death in the early hours of Monday morning at the exclusive Pecanwood Golf Estate in Hartbeespoort, North West.

It is alleged that trouble started after she stormed out of a bedroom she was sharing with the owner of the house wearing only a vest and panties.

These startling details came to light during an intense investigation by Sunday World on the circumstances surrounding Mathuloe's death.

Multiple sources including eyewitnesses, police officers, security guards and residents painted a picture of an extraordinary suicide that took place in public in the quiet gated golf estate nestled in the resort town.

North West police spokesman Sabata Mokgwabone said: "Investigation regarding the death of Lebogang Mathuloe is under way. At this stage we are investigating a case of inquest based on allegations that Lebogang stabbed herself several times with a knife early on Monday.

"We are unable to disclose the information you want because it is part of the evidence that will be presented before the court. Regarding drugs, two males who were in the company of Lebogang and another lady, were arrested for possession of drugs [dagga]. The pair has already paid admission of guilt fines."

According to a local police source, a packet containing a white substance suspected to be illicit drugs was found in Mathuloe's handbag and was sent to be tested at the police laboratory.

As a result of this, the provincial police head office ordered her body to be removed from a local mortuary in Kagiso, Mogale City, and be brought to Potchefstroom for a second postmortem.

"The province ordered the second autopsy because the one done in Brits did not include a toxicology to determine if she had any substances like drugs or poison in her blood.

"The second tests showed that there were drugs in her system," said a police source.

The player confirmed that he knew the model and former contestant of Take Me Out Mzansi but did not have a romantic relationship with her.

"I met her through my friend Nana but I deny that I gave her my bank card. I have all my credit cards with me," he said.

Bidvest Wits coach Gavin Hunt earlier this week had to issue a statement in which he denied having had a romantic relationship with Mathuloe after selfies of her and the coach flooded social media.

Sunday World has also learnt that Mathuloe was married to a Swazi polygamist in a traditional ceremony late last year and immediately moved to the southern African country to join her new husband and other wives.

She came back to South Africa in April and never went back. A white wedding was planned to take place in October this year.

Mathuloe's grandmother Ellen confirmed that her grandchild was married to a Swazi man but did not want to discuss the matter further.

She saw Mathuloe three weeks before her death after she left their Kagiso home, saying she was going to a photoshoot.

"She kept on saying they have a lot of shoots and she would come back home. The last time I spoke to her was on Thursday and she said she would be back on Saturday. But she never came back.

"I tried to call her on Sunday but she never answered and I went to church.

"The next call I got from her was on Monday morning when she told me she was kidnapped and that her life was in danger. That call ended abruptly," said the 64-year-old grandma.