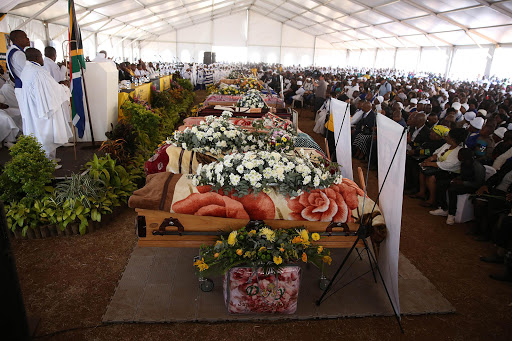 Nineteen framed pictures rested on top of blanket-covered coffins‚ a chilling reminder of the lives that were lost in a horrific minibus crash west of Durban last week.

Thousands of mourners gathered in a massive tent at a sports field in the KwaZulu-Natal Midlands on Saturday morning to pay their respect to the victims of horror crash. A mass funeral took place at the Inkosi Manzolwandle Sports Field in KwaXimba‚ just a few kilometres from the fatal crash site.

Last Sunday morning‚ 19 church members were killed when a minibus taxi that was ferrying congregants to a tombstone unveiling ceremony overturned at Msunduzi Bridge near Nagle Dam in KwaXimba‚ halfway between Durban and Pietermaritzburg. It was reported that the taxi was overloaded and is alleged to have experienced break failure.

At the funeral members of the Zion church sang songs of praise.