Who was Khwezi? Here’s what we learnt during the Zuma rape trial 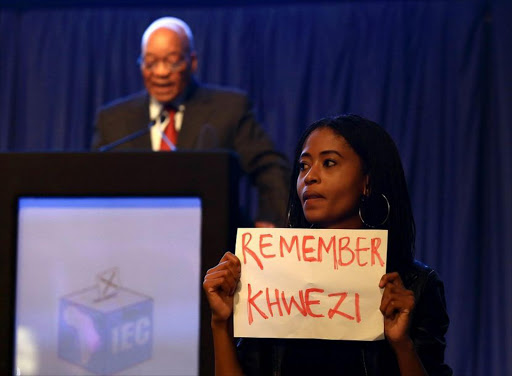 The court heard that she was “bi-sexual with a lesbian orientation”. She recalled having had sexual relations with approximately five men.

According to her court testimony‚ she came back to South Africa in December 1990. She phoned Zuma “several times” around 1998. When she was employed in Pretoria in 2001‚ she saw him for the first time in person. In 2002‚ they lost contact when she left for the United Kingdom. On her return the next year‚ she again found work in Pretoria and resumed contact with the then deputy president.

She had appealed to Zuma to help her find funding to study. She was interested in studying homeopathic medicine in Australia and doing a course in the UK.

However‚ her academic record was poor.

She claimed to have passed matric in 1992 at Phambili High School in Durban.

From 1993 to 1997‚ she mainly did voluntary work with different non-governmental organisations with a keen interest in HIV-awareness.

In 1995‚ she was interested in joining the ministry‚ and enrolled as a student at the RR Wright theological seminary in Vereeniging. She was a member of the African Methodist church. To join the ministry‚ she had to have a matric certificate. It then transpired that she did not pass matric.

In 1998‚ she started tertiary education at the University of Natal in 1998. She did not complete her studies.

Her mother described her as a person who had been raped on a number of occasions from a young age and whose father died tragically in a motor accident. That was the cause of her problems. It was also caused by Khwezi “seeing her comrades die‚ her uncles die in exile‚ attacks being carried out on the people in exile and then you finally come home with a number of problems”.

Some of the problems‚ according to the judgment summarising her mother’s testimony‚ were that Khwezi did not have a matric certificate and that she could not go to university. She tried to write exams and failed‚ and finally she got expelled from university. “Then she finds out that she is HIV-positive‚ she is given tablets that make her a zombie‚ and all these problems add up to a confused and troubled person.”

The High Court looked into some of the allegations of rape against the other men‚ some of which were contained in her memoir‚ and found them to be false.

Referring to six prior cases‚ it saw a pattern that she was inclined to falsely accuse men of having raped or attempted to rape her.

The court found the state had failed to prove the case against Zuma‚ accepting his version that they had consensual sex.

After Zuma was acquitted on May 5 2006 in the High Court in Johannesburg‚ Khwezi and her mother fled to the Netherlands‚ where they were given asylum after the high-profile trial. They struggled with language and cultural differences in the Netherlands and later left for Tanzania before returning to South Africa.

The woman who accused President Jacob Zuma of rape in 2005‚ Aids activist Fezekile Ntsukela Kuzwayo‚ who was always referred to in the media simply as Khwezi‚ has died.

News of Khwezi’s death was confirmed by her family in a media statement released on Sunday.

“It is with our deepest sorrow that the Kuzwayo family announces the passing of our daughter Fezekile Ntsukela Kuzwayo. In our family she was lovingly known as Fezeka‚ and in the public domain her supporters called her Khwezi‚” the statement read.

They described her as: “A loving soul. A daughter‚ a sister and an aunt we will forever hold dear in our hearts. We loved her in life‚ let us never forget her after death.”

Khwezi made headlines after she accused President Jacob Zuma of raping her ten years ago‚ but he was acquitted of the charge in May 2006.

It is not yet clear what led to the death of Khwezi but she was reportedly diagnosed with HIV/Aids in 1990.

Her family has asked for “space to mourn privately as we prepare to lay her to rest”.