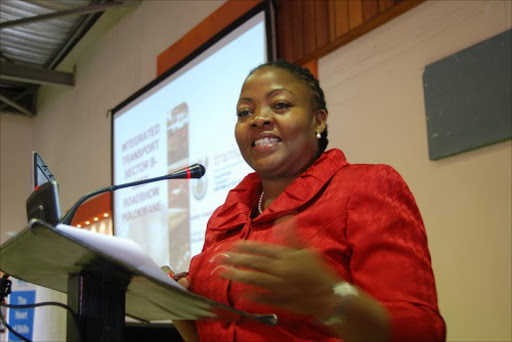 THE marriage of former Limpopo MEC for roads and transport Pinky Kekana has reached the end of the road.

Kekana, who is the mother of University of Pretoria defender Grant Kekana, kicked her hubby, Jerry Manyama, out of their Polokwane home about a week ago.

Kekana sent Manyama packing after she obtained a protection order against him at the Polokwane Magistrate's Court last month.

She also opened a case of assault against him.

This came after he allegedly beat and kicked her when she asked him to use shower gel instead of bath soap.

Manyama, who is head of human resources at the City of Polokwane, is apparently bunkering at a friend's place.

Kekana, speaking for the first time since the assault incident, confirmed that she sent Manyama packing and that she was happily single.

"We did not have time for each other.

"That is why we parted ways and I'm not willing to comment further because I don't want to hang my dirty linen out in the public," she said.

A senior politician, who did not want to be named for fear of reprisal, confirmed that the couple split after failing to resolve their long-simmering marital problems.

This included Manyama's alleged failure to discharge some of his duties at home, the politician said.

The politician said Manyama promised to settle the outstanding R15000 of the R20000 lobola he was charged by Kekana's parents in 2003.

"She feels that this is a breach of promise and she may sue him for it," said the politician.

The politician said that what had angered Kekana most was when Manyama failed to pay the rates and taxes for the house they bought together a few years ago.

"They bought the house jointly but Pinky is the one who has been paying about R14000 in monthly instalments for it.

"Jerry was, as per their agreement, supposed to pay its rates and taxes, school fees for their daughter and buy groceries, but he failed to so," the source said.

He said the straw that broke the camel's back was when Pinky learnt that their property owed over R90000 in unpaid rates and taxes and the council threatened to take legal action against them.

Another politician confirmed that the two were no longer together and that divorce rumours were rife.

"The divorce is inevitable. There is no way that they can get back together because she does not want anything to do with him any more."

Kekana's legal representative, advocate Tumi Mokoena, said negotiations for an out-of-court settlement with Manyama's lawyers were at an advanced stage.